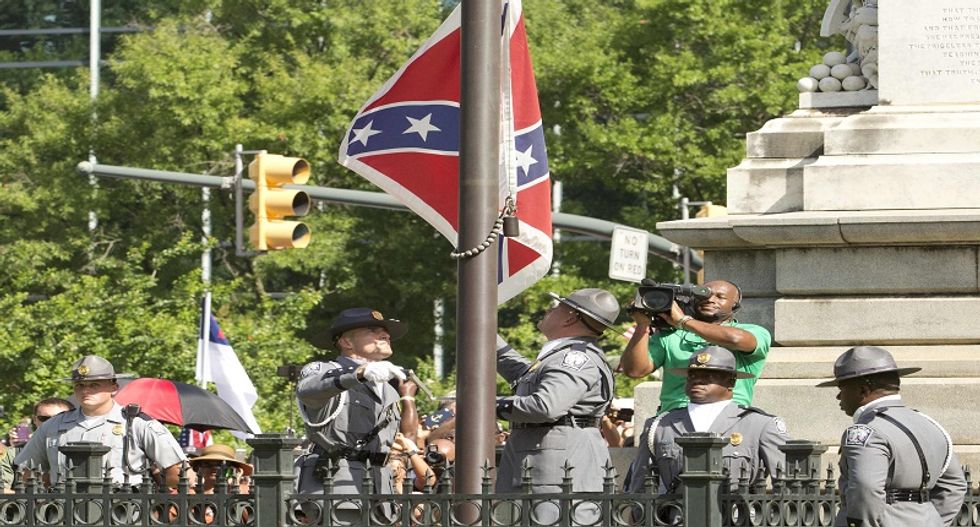 The Confederate battle flag is permanently removed from the South Carolina statehouse grounds during a ceremony in Columbia, South Carolina, July, 10, 2015. (REUTERS/Jason Miczek)

The justification for building a monument to black Confederate soldiers is crumbling as historians point out there's no evidence such combatants ever existed.

The bill would also require public schools to teach the contributions of black people toward the Confederate cause, and Chumley said his proposal had already accomplished his goal even as historians undermine its intent.

“We are all learning a lot," Chumley said. "The purpose of the bill is education."

The State reviewed pension records from 1923 that show three blacks claimed armed service in South Carolina units under the Confederacy, with two of them confirmed as cooks or servants and none for armed service.

“In all my years of research, I can say I have seen no documentation of black South Carolina soldiers fighting for the Confederacy," said historian Walter Edgar, the longtime director of the University of South Carolina’s Institute for Southern Studies. "In fact, when secession came, the state turned down free (blacks) who wanted to volunteer because they didn’t want armed persons of color.

Edgar, who wrote a history of the state, said any black person who served in a Confederate unit in South Carolina was either a slave or an unpaid laborer working against his will.

South Carolina forbid blacks from carrying weapons during most of the Civil War out of fear of a slave revolt, but the Confederacy did allow black soldiers in the final months of the doomed rebellion.

State Sen. Darrell Jackson (D-Columbia), a black Democrat, and state Sen. Greg Gregory (R-Columbia), a white Republican, filed a separate proposal to memorialize Robert Smalls, who hijacked a Confederate supply ship in 1862 and turned it over to the Union.

He went on to become a state legislator and five-term congressman.

If the monument is built, it would be the first on Statehouse grounds to honor an individual African-American.