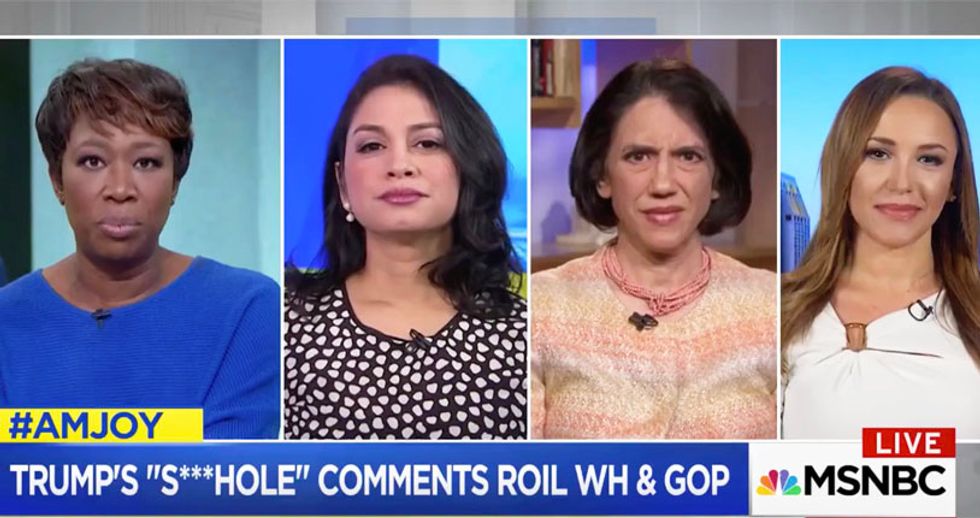 For the second day in a row, Joy Reid pulled the plug on a conservative guest ranting about President Donald Trump's racist immigration comments, with the MSNBC host cautioning her Sunday guest, "This is not Fox News."

During a panel discussion on Trump's comments about Haiti and African nations being "sh*tholes," the AMJoy host turned first to conservative commentator Stephanie Hamill.

"Stephanie, I will start with you. when you heard what Donald Trump said about Haiti, about the African countries, really talking about El Salvador and any other countries that are nonwhite, how did you feel when you heard those comments?" Reid asked.

"Joy, we didn't actually hear him say those words," Hamill began only to have Reid clarify, "When you read them."

"When I read them, yeah, and this is the biggest fake news story of the week," Hamill replied. "It's interesting to sit back and watch people are so angry about what that the president didn't say, and they are more angry than they are at the Clinton's for getting rich off the poor Haitians with the Clinton Foundation."

As the panel expressed shock at Hamill bringing up the Clinton's, Hamill pressed on.

"You can ask Klaus Eberwein, the former Haitian government official that has all the dirt on the Clinton Foundation-- oh, wait, you can't ask him because he mysteriously committed suicide the day he was supposed to testify," Hamill blurted

"What are you talking about?" asked conservative Washington Post columnist Jennifer Rubin. "This is nuts."

"Joy, I didn't get talking points," Hamill shot back, attempting to get back to her story.

Host Reid then cut her off with a warning.

"I don't know you, Stephanie, but let me explain this to you: this is not Fox News and we are not going to play the game of rolling out crazy conspiracy theories in answers to my questions and take us off track," Reid lectured. "So I am going to put you pause for the minute, I'm going to put you to the side because they are more familiar with the way that we do things here."

Former acting Solicitor General Neal Katyal was the lawyer who appeared before the Supreme Court to argue in the Moore v. Harper case, and he not only came prepared, he came prepared to go after the justices with their own words.

As the counsel for Common Cause, Katyal walked through the ways in which the Supreme Court inserted itself into the state laws after previously saying that they were leaving laws up to the states to decide, which is yet another contradiction. That said, the courts claimed "states rights" for abortion but then blocked it for gun regulation.

Michelle Obama talks about her book ‘Light We Carry’ in Chicago with David Letterman: ‘The world made me practice liking myself’

CHICAGO — Michelle Obama doesn’t tour for a book. She appears. She materializes, like a fond memory from a better time, suddenly in front of you again, barely aged. She has become the closest thing — arguably — America has to royalty. That’s not opinion. That’s just very selective facts. “Becoming,” her previous memoir, sold 17 million copies worldwide and that book tour, four years ago, played sold-out arenas. Her new book, “The Light We Carry: Overcoming in Uncertain Times” — though pulling no way near the record-breaking numbers of “Becoming” — is poised to be the holiday’s bestselling book...