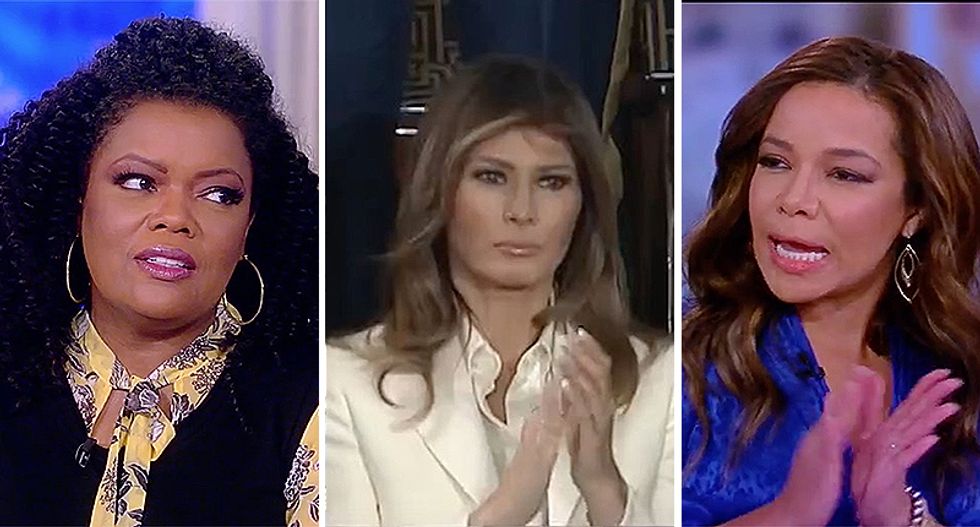 The women of "The View" stood in solidarity with First Lady Melania Trump in wake of Tuesday's State of the Union address.

"The First Lady broke tradition and arrived separately from him," Whoopi Goldberg said. "She did not, I thought, look all that happy to be there, but maybe it was just me."

"I don't know that she's very happy right now, Whoopi, she seems very upset. I don't know what could be happening right now in her marriage for her to be upset about though," joked guest host Yvette Nicole Brown.

She went on to say that it seems like Mrs. Trump has been trolling her husband in subtle ways. Some said that the fact that she wore a cream suit was curious because last year Democratic women wore white to the speech and Hillary Clinton wore white during her DNC acceptance speech.

"You know, like throwing some low-key shade, like she hasn't appeared publicly with him," Hostin said. "She appeared separately from him. She wasn't standing and clapping."

Meghan McCain said that she feels bad for Mrs. Trump because as someone who was in a political family it's difficult to have troublesome things happening and then have to come out on stage with a smile.

She said that Hillary Clinton also came separately to the State of the Union once while her husband was speaking, though Raw Story cannot confirm that is true. McCain also did not clarify if it was after Mrs. Clinton found out about her husband's affair.

"I don't want to be flippant because my ire is for what the man did not for what Melania is going through," Brown said. "Sometimes people joke, but I feel like Melania is in a hostage situation. Let me explain, I don't want to make light of hostage situations. I don't think she wanted this. I don't think she thought this would happen. And I think she's been doing the best she can with the situation she's found herself in and so she has to publicly go out and deal with the stuff he's doing. I can agree with you and I think she looked beautiful yesterday."

After the commercial break, McCain said that she feels for Mrs. Trump but that if the affair happened the public deserves to know.

"There are real ramifications for these accusations," McCain said.

"But if he did this, it's his fault that she's in this," Hostin said.

McCain wants to see Daniels come out and be honest. Hostin explained that often non-disclosure agreements say that there will be a fine or you must return the money. The alleged $130,000 settlement could easily be covered by a major news outlet that wants the exclusive, but if the fine is more than the settlement it might be the reason Daniels stays silent and plays coy.