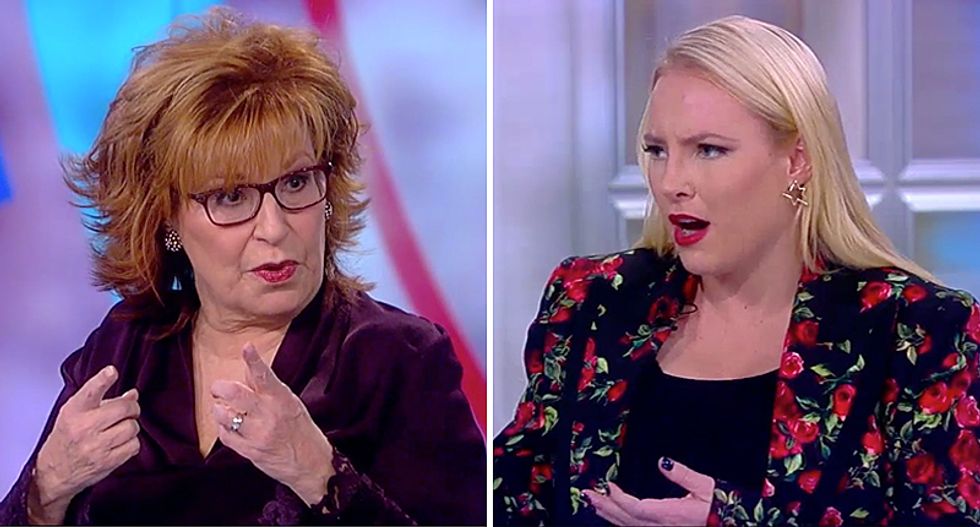 Joy Behar is continuing to sound the alarm on the mental stability of President Donald Trump.

"Trump needs to be medicated or hospitalized at this point," the co-host of "The View" said Wednesday. Otherwise, "he is just going to kill all of us. And, you know, my feeling is that they're probably getting closer to him in the Mueller investigation and that's what this is about. A lot of it. It's like he'll blow the whole world up so that his stupid sons don't have to go to jail."

Fellow "View" co-host Sunny Hostin wondered if there was a hidden strategy afoot.

"Because, truly, if he is just playing a game of chicken with a dictator in North Korea we really are in trouble," she said. "I mean, people are talking about the 25th Amendment and they're saying he's just not mentally fit to be the president. And I think if you're doing this, is there a mental fitness problem? We all know the ramifications of nuclear war."

Republican Meghan McCain couldn't help but note the phallic nature of Trump's tweet. She said that it was further evidence that a woman needs to be elected to the White House, to further circumvent measuring the size of one's nuclear button. She also noted that there is no nuclear button on the desk of the president.

"First the president will have to convene with military and civilian advisors in D.C. Once the decision is to strike, a senior official in the Pentagon war room must formally authenticate the code. Then the launch crew takes over from there," McCain explained. She said that the checks and balances in place for the American leader ensures no one person can start a nuclear war.

Behar agreed that there are checks in place that help the world from losing it over a tweet like the one Trump sent Tuesday. However, Trump "is dealing with a mentally unstable opponent, who does not have those checks and balances," she said. She asked why play a game back and forth "with someone who is just as crazy as Trump."

She went on to ask where the Republican Party is and why they're not acting to ensure the U.S. is safe.

"Where are all of the Republicans in power besides Trump?" she asked. "Where is the Republican Party, who has all the power in the world, to do something about this man. I mean, what do they need a launch to convince them? What is it that will do it?"

Former Democratic rival Hillary Clinton famously foreshadowed the Tweet, saying that Trump was "a man you can bait with a tweet" and claimed such a leader "is not a man we can trust with nuclear weapons."

An Axios report Wednesday revealed many White House aides found Trump's tweet alarming, but were too fearful to speak up in opposition to it. Like Behar, former FBI director James Comey called out the independent minded people in the FBI and Justice Department for not speaking out.