Watch Bernie Sanders mock Trump's insistence on his wall as part of budget deal: 'It made sense back in the 15th century' 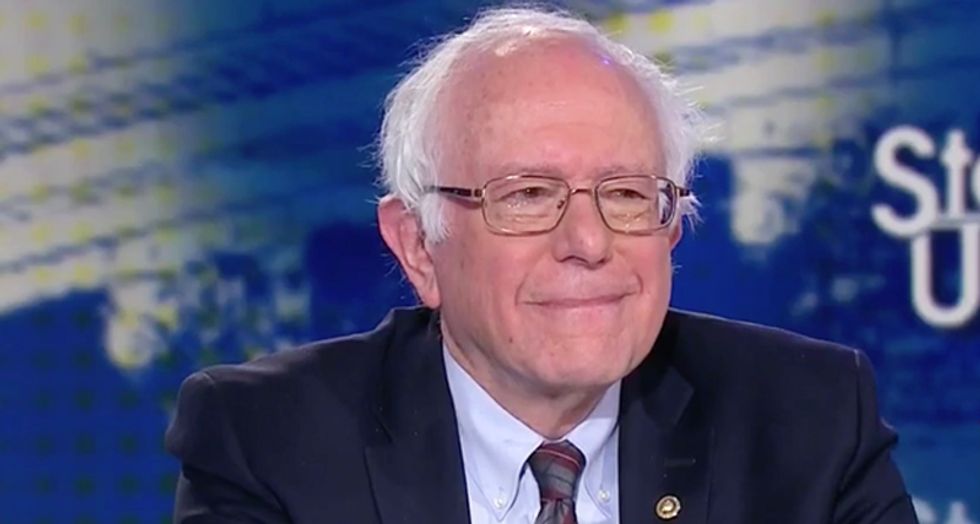 Appearing on CNN's State of the Union with Jake Tapper, Sen. Bernie Sanders (I-VT) smirked at President Donald Trump's insistence of Congress fully funding construction of a wall between the U.S. and Mexico, saying it made sense in another time and another place.

By which he meant the Great Wall of China built centuries ago.

Addressing the government shut down, Sanders explained, "Let's sit down and talk and, by the way, we can move very, very rapidly. What I want to assure the American people, there's a lot more agreement on the stuff than people think. For example, we need to adequately fund the Department of Defense and obviously non-defense spending."

"We need to deal, after four months, with the fact that we have not yet done disaster relief. There are tens of thousands of people in Puerto Rico, people in Houston, Texas, who are still hurting from those hurricanes," he continued. "How come the Republicans were so quick to move forward to try to provide huge tax breaks for billionaires? They addressed that issue in their tax bill."

"On the immigration issue," host Tapper asked. "Would you be willing to vote for $20 billion in appropriations to build a border wall in exchange for a pathway to some sort of legal status for the Dreamers? Is that a compromise you're willing to make?"

"It's something," Sanders slyly replied. "I think the wall was a great idea in the 15th century when the Chinese built the Great China Wall. I don't think it makes a whole lot of sense now."

"I'm willing to sit down in a room and do what the American people want and what the American people want is to provide legal status to the Dreamers and a path toward citizenship," he added. "Let's sit down and do that -- that has to be passed. Let me say this: if we allow Trump to get away with what he did, and that is repeal the executive order on DACA, and if the 800,000 people, young people are subjected to deportation, this will be one of the ugliest stains in the history of the United States."