WATCH: Ted Cruz gets busted by MSNBC reporter for lying about his role in 2013 government shutdown 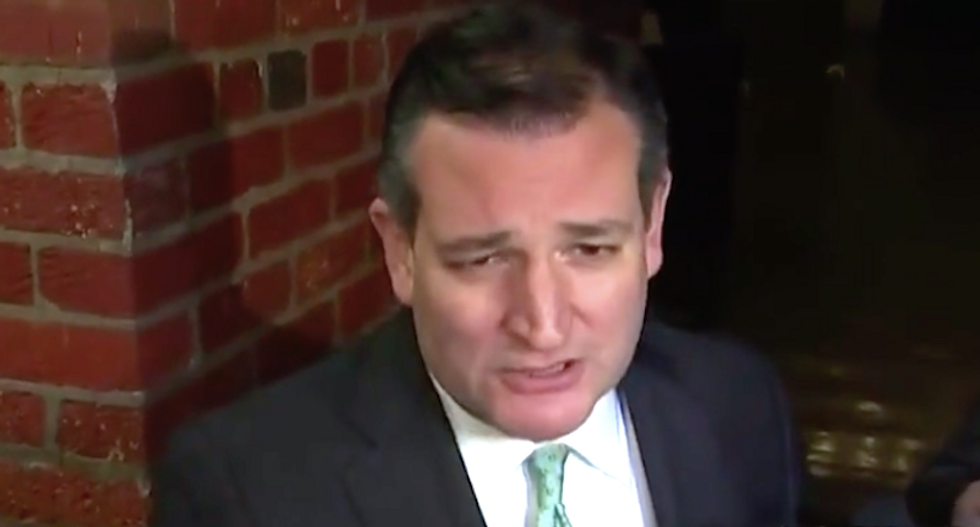 Reporters called out Sen. Ted Cruz (R-TX) for misrepresenting his role in the last government shutdown.

The Texas Republican blamed "angry" Democrats for shutting down the federal government in an attempt to derails President Donald Trump's agenda, but MSNBC congressional correspondent Kasie Hunt refuse to let him weasel out of the 2013 shutdown he helped engineer.

"They're angry, they hate the president and demanding Senate Democrats oppose everything, resist everything, shut everything down," Cruz said, and Hunt told him that reminded her of what he said more than four years ago. "Now i recognize that is a media narrative you love to tell, but it's worth noting in 2013 --"

"'Green Eggs and Ham?'" Hunt interrupted, reminding Cruz of the children's book he read during a filibuster in 2013.

Cruz and other Senate Republicans at the time kept attaching amendments to the appropriations bill that would have defunded the Affordable Care Act, which President Barack Obama threatened to veto.

Hunt wasn't letting Cruz wriggle out of that.

"Sir, you stood in the way of that," Hunt said, and Cruz insisted she was "factually incorrect. "It's not, though."

Cruz blamed Democrats for the previous shutdown -- but Hunt again called him out by reminding him of his scheme to undo Obamacare before it could fully take effect.

"Sir, that's simply not the case," she said. "This was about Obamacare funding."

Cruz accused the reporter of trying to debate him without any facts, but Hunt kept pushing.

"Why were all of your GOP colleagues angry with you if you didn't?" she said.

Cruz then tried to escape blame by shoving it back on fellow Republicans.

Then he went on to blame the media for pushing the idea that Republicans caused government shutdowns.

"It's actually, I think, one of the reasons why we saw a shutdown," Cruz said. "Because, I think, Chuck Schumer and the Democrats believed they could shut the government down and reporters would dutifully blame it on the Republicans, no matter what the facts were."

Cruz took a few more questions from other reporters before excusing himself to leave, and Hunt recapped what had just happened.

"That was an interesting exchange," Hunt said. "I would just like to say, I was going back and forth with the senator. He's technically correct about the way that the procedure of this played out, but there is no question about how the government shutdown unfolded in 2013, which is that Senate Republicans pushed to defund Obamacare."

"Ted Cruz angered many of his own colleagues, there were testy meetings, he was essentially an outcast," she continued. "Mitch McConnell was not happy with him, and the government shut down because clearly Senate Democrats were not going to go along with a budget agreement that defunded Obamacare. The dynamics were a little different, but if there's any comparison to be made here it would be in this particular case Democrats obviously do not control the Senate. They were making certain demands about what is included in a measure, refused to provide the votes for a shutdown. So I think if you want to make a comparison, you can compare Senate Democrats to Ted Cruz.