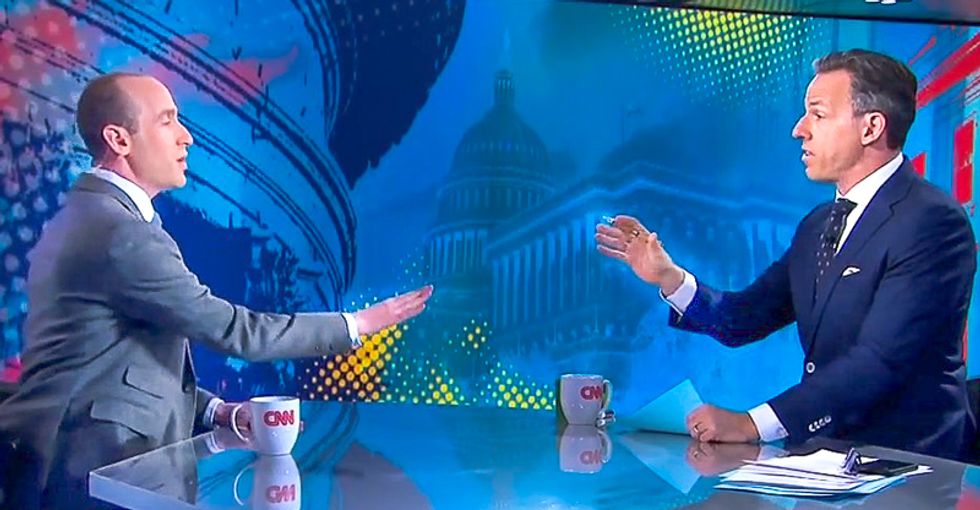 During an interview that aired on Sunday, Tapper accused Miller of filibustering instead of answering questions that have been raised by Michael Wolff's new book, Fire and Fury: Inside Trump's White House.

Tapper noted that President Trump had recently called himself a "stable genius" in response to Wolff's book, which alleges that the president is not fit to serve.

"It happens to be a true statement," Miller shot back.

"I'm sure he's watching and he's happy you said that," a frustrated Tapper said.

"That was a snide remark," Miller complained.

"I have no idea why you are attacking me," Tapper remarked.

As the CNN host tried to ask questions about the book, Miller yelled that CNN attacks Trump "24/7".

"You have 24 hours of negative anti-Trump hysterical coverage on this network!" Miller shouted. "Viewers are entitled to have three minutes of the truth! Why don't you just give me three minutes to tell you about the Donald Trump that I know."

"Because it's my show and I don't want to do that," Tapper jabbed. "Stephen, settle down, calm down."

But Tapper's attempts to calm Miller failed, and he was eventually forced to end the interview.

"Okay, you're not answering the questions," Tapper said. "I get it. There's one viewer that you care about right now and you're being obsequious because you're trying to please him. I've wasted enough of my viewers time."

With that, Tapper cut off Miller and tossed to commercial.