The American public has power over the gun business – why doesn’t it use it? 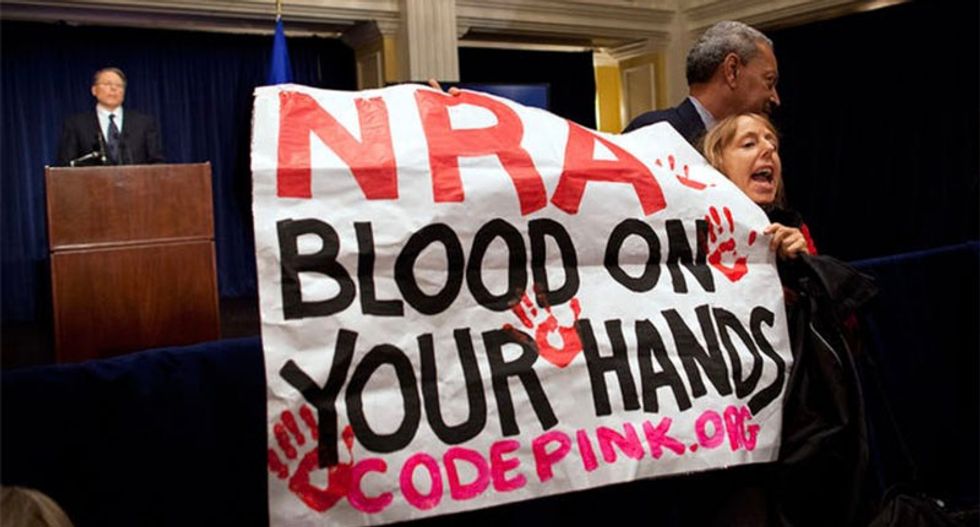 As teenagers in Parkland, Florida, dressed for the funerals of their friends – the latest victims of a mass shooting in the U.S. – weary outrage poured forth on social media and in op-eds across the country. Once again, survivors, victims’ families and critics of U.S. gun laws demanded action to address the never-ending cycle of mass shootings and routine violence ravaging American neighborhoods.

The 14 children and three adults shot dead on Feb. 14 at Marjory Stoneman Douglas High School were casualties of the nation’s 30th mass shooting this year – defined by the Gun Violence Archive as involving at least four victims including the injured – and one of the deadliest in U.S. history. A question on many minds is whether this massacre will finally compel Washington to act. Few commentators seem to believe so.

If advocates for reform despair, I can understand. The politics seem intractable. It’s easy to feel powerless.

But what I’ve learned from a decade of studying the history of the arms trade has convinced me that the American public has more power over the gun business than most people realize. Taxpayers have always been the arms industry’s indispensable patrons.

Gun maker Simeon North made this flintlock pistol around 1813.

The U.S. arms industry’s close alliance with the government is as old as the country itself, beginning with the American Revolution.

Forced to rely on foreign weapons during the war, President George Washington wanted to ensure that the new republic had its own arms industry. Inspired by European practice, he and his successors built public arsenals for the production of firearms in Springfield and Harper’s Ferry. They also began doling out lucrative arms contracts to private manufacturers such as Simeon North, the first official U.S. pistol maker, and Eli Whitney, inventor of the cotton gin.

The War of 1812, perpetual conflicts with Native Americans and the U.S.-Mexican War all fed the industry’s growth. By the early 1850s, the United States was emerging as a world-class arms producer. Now-iconic American companies like those started by Eliphalet Remington and Samuel Colt began to acquire international reputations. Even the mighty gun-making center of Great Britain started emulating the American system of interchangeable parts and mechanized production.

This is an advertisement for a Remington rifle in the Army and Navy Journal in 1871.

Profit in war and peace

The Union poured huge sums of money into arms procurement, which manufacturers then invested in new capacity and infrastructure. By 1865, for example, Remington had made nearly US$3 million producing firearms for the Union. The Confederacy, with its weak industrial base, had to import the vast majority of its weapons.

The war’s end meant a collapse in demand and bankruptcy for several gun makers. Those that prospered afterward, such as Colt, Remington and Winchester, did so by securing contracts from foreign governments and hitching their domestic marketing to the brutal romance of the American West.

While peace deprived gun makers of government money for a time, it delivered a windfall to well-capitalized dealers. That’s because within five years of Robert E. Lee’s surrender at Appomattox, the War Department had decommissioned most of its guns and auctioned off some 1,340,000 to private arms dealers, such as Schuyler, Hartley and Graham. The Western Hemisphere’s largest private arms dealer at the time, the company scooped up warehouses full of cut-rate army muskets and rifles and made fortunes reselling them at home and abroad. 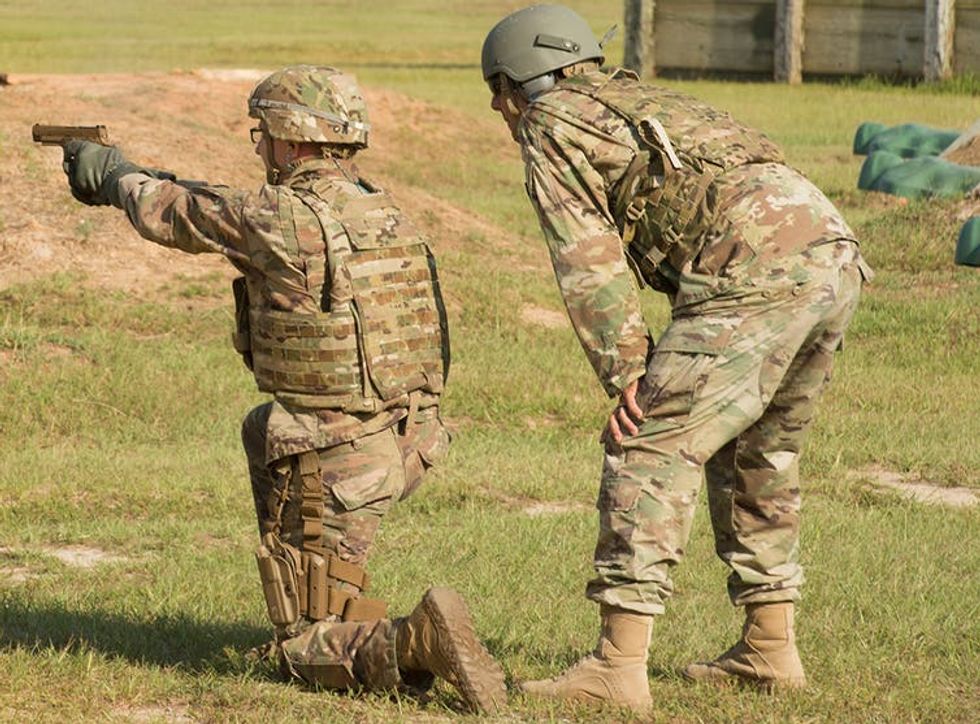 A soldier fires the Sig Sauer P320, which the Army has chosen as its new standard pistol.

By the late 19th century, America’s increasingly aggressive role in the world insured steady business for the country’s gun makers.

The Spanish American War brought a new wave of contracts, as did both World Wars, Korea, Vietnam, Afghanistan, Iraq and the dozens of smaller conflicts that the U.S. waged around the globe in the 20th and early 21st century. As the U.S. built up the world’s most powerful military and established bases across the globe, the size of the contracts soared.

Consider Sig Sauer, the New Hampshire arms producer that made the MCX rifle used in the Orlando Pulse nightclub massacre. In addition to arming nearly a third of the country’s law enforcement, it recently won the coveted contract for the Army’s new standard pistol, ultimately worth $350 million to $580 million.

Colt might best illustrate the importance of public money for prominent civilian arms manufacturers. Maker of scores of iconic guns for the civilian market, including the AR-15 carbine used in the 1996 massacre that prompted Australia to enact its famously sweeping gun restrictions, Colt has also relied heavily on government contracts since the 19th century. The Vietnam War initiated a long era of making M16s for the military, and the company continued to land contracts as American war-making shifted from Southeast Asia to the Middle East. But Colt’s reliance on government was so great that it filed for bankruptcy in 2015, in part because it had lost the military contract for the M4 rifle two years earlier.

Overall, gun makers relied on government contracts for about 40 percent of their revenues in 2012.

Competition for contracts spurred manufacturers to make lethal innovations, such as handguns with magazines that hold 12 or 15 rounds rather than seven. Absent regulation, these innovations show up in gun enthusiast periodicals, sporting goods stores and emergency rooms. 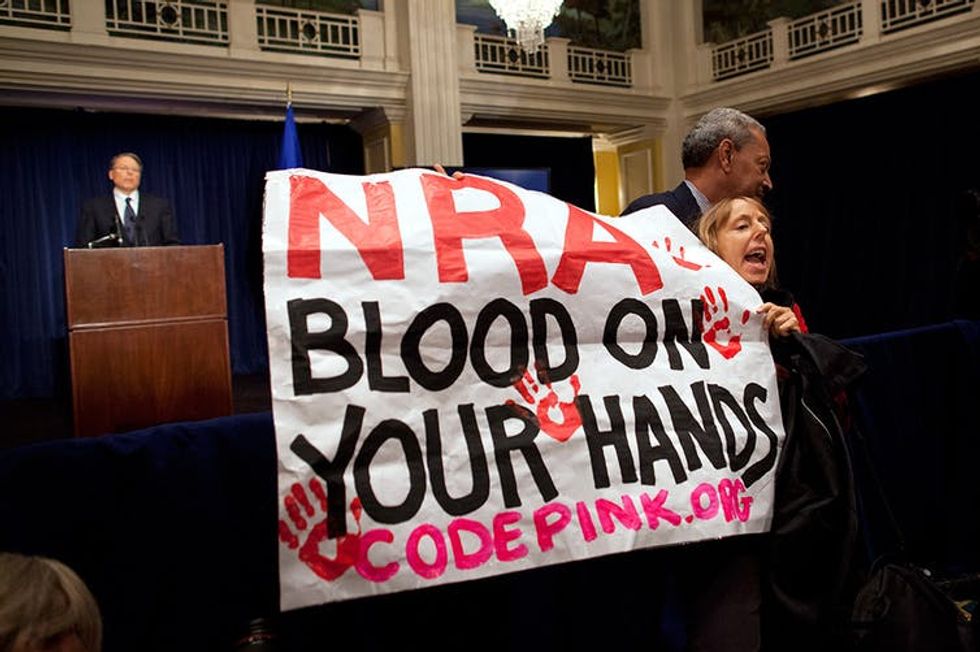 An activist is led away by security after protesting during a statement by NRA CEO Wayne LaPierre, left, during a news conference in response to the Connecticut school shooting in 2012.

So how has the industry managed to avoid more significant regulation, especially given the public anger and calls for legislation that follow horrific massacres like the one in Las Vegas?

Given their historic dependence on U.S. taxpayers, one might think that small arms makers would have been compelled to make meaningful concessions in such moments. But that seldom happens, thanks in large part to the National Rifle Association, a complicated yet invaluable industry partner.

Prior to the 1930s, meaningful firearms regulations came from state and local governments. There was little significant federal regulation until 1934, when Congress – spurred by the bloody “Tommy gun era” – debated the National Firearms Act.

The NRA, founded in 1871 as an organization focused on hunting and marksmanship, rallied its members to defeat the most important component of that bill: a tax meant to make it far more difficult to purchase handguns. Again in 1968, the NRA ensured Lyndon Johnson’s Gun Control Act wouldn’t include licensing and registration requirements.

In 1989, it helped delay and water down the Brady Act, which mandated background checks for arms purchased from federally licensed dealers. In 1996 the NRA engineered a virtual ban on federal funding for research into gun violence. In 2000, the group led a successful boycott of a gun maker that cooperated with the Clinton administration on gun safety measures. And it scored another big victory in 2005, by limiting the industry’s liability to gun-related lawsuits.

Most recently, the gun lobby has succeeded by promoting an ingenious illusion. It has framed government as the enemy of the gun business rather than its indispensable historic patron, convincing millions of American consumers that the state may at any moment stop them from buying guns or even try to confiscate them.

This helps explain why the share price of gun makers so often jumps after mass shootings. Investors know they have little to fear from new regulation and expect sales to rise anyway.

A question worth asking

So with the help of the NRA’s magic, major arms manufacturers have for decades thwarted regulations that majorities of Americans support.

Yet almost never does this political activity seem to jeopardize access to lucrative government contracts.

Americans interested in reform might reflect on that fact. They might start asking their representatives where they get their guns. It isn’t just the military and scores of federal agencies. States, counties and local governments buy plenty of guns, too.

Take Smith & Wesson, maker of the AR-15 Nikolas Cruz just used to kill his teachers and classmates at the Marjory Stoneman Douglas High School. Smith & Wesson is well into a five-year contract to supply handguns to the Los Angeles Police Department, the second-largest in the country. In 2016 the company contributed $500,000 (more than any other firm) to a get-out-the-vote operation designed to defeat candidates who favor tougher gun laws.

Do voters in LA – or in the rest of the country – know that they are indirectly subsidizing the gun lobby’s campaign against regulation? Concerned citizens should begin acting like the consumers they are and holding gun makers to account for political activities that imperil public safety.

This is an updated version of an article originally published on Oct. 9, 2017.