'They can bring it on, it's a joke'; Ex-FBI agent dad of Parkland survivor lashes out at conspiracy kooks attacking his son 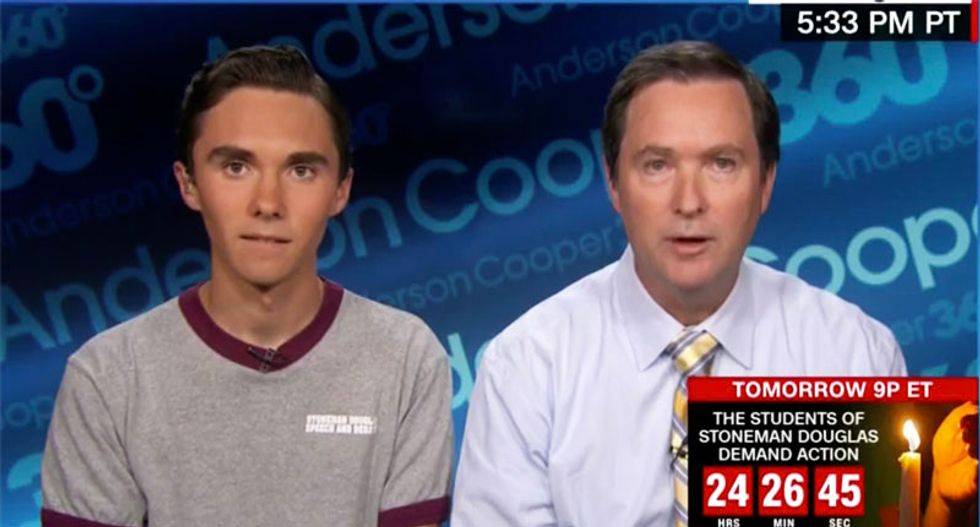 The ex-FBI agent father of one of the survivors of the high school shooting in Parkland, Florida, lashed out at conspiracy theorists who claim his son was not witness to the massacre but a "crisis actor" who shows up at shootings to draw media attention.

Appearing with AC360, Kevin Hogg, father of student David Hogg, was disgusted at the attacks on his son coming after the shooting at Marjory Stoneman Douglas High School that resulted in 17 deaths.

Speaking with host Anderson Cooper, student David Hogg scoffed at the conspiracy mongers, including an aide to a Florida Republican lawmaker who made the accusation -- only to be fired hours later.

"I want you to respond to part of another speech that Donald Trump Jr. likes," Cooper asjked. "Could it be that this student ran cover for his dad who works as an FBI agent."

"The fact that these people are being critical of me as a witness and personally as a victim to this incident and having to witness this and live through it again and again, it is unbelievable," David Hogg said. "We are trying to fix that [weapons laws] unlike those people who are tweeting that stuff about me and unlike the people that are tweeting stuff about my dad. I know the people working at the FBI are hard workers."

Kevin Fogg jumped in to list his accomplishments and slap back at his critics.

"I don't know how they believe that there is such a thing" he said about critics accusing him of using his son to defraud the public. "My career has been perfect. I was a navy pilot before, an elementary school teacher. I moved on and got on with the FBI and I was proud of it and I still am."

"We would teach other countries, all over Southeast Asia and the Philippines in Cambodia, these management courses," he continued. "One of the tweets I saw claimed that I was involved with something -- and there is no way. I don't know why they would say that."

As Cooper wrapped up the segment he apologized to the two, telling the father, "I wish you the best.," with Kevin Hogg, firing back, 'I'm not worried about it. They can bring it on. It's a joke."