Eric Trump: Russia meddling ‘started off as a hoax’ — but ‘I wish Obama would have' stopped them 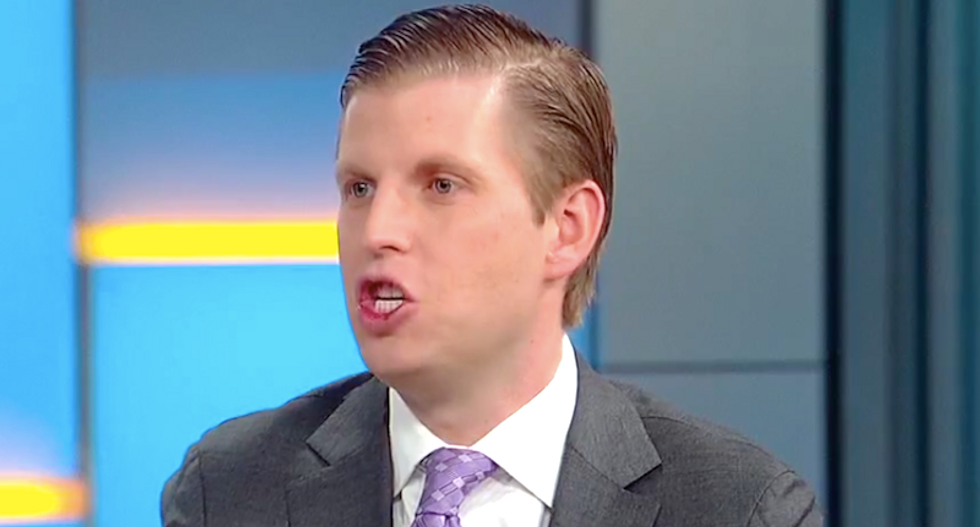 Eric Trump admitted on Fox News that Russia had interfered in the 2016 election -- but he blamed his father's predecessor for not stopping it.

The president's son told "Fox & Friends" that the Democratic response to a memo compiled by Rep. Devin Nunes (R-CA) showed the FBI investigation of the Trump campaign was politically motivated, although even co-host Ainsley Earhardt gently corrected his claim.

"My thoughts are, they dug and dug and dug and finally found themselves," Trump said. "It's awful what happened. You had the FBI and Department of Justice, you had them use opposition research to spy on a presidential candidate in this country, and it's horrible. This is the worst abuse imaginable, something you would see in a third world country, and it happened here."

"You know, people have to take this seriously," he continued. "There is nothing worse than when, you know, government -- I mean, it's just very, very dark what happened, and I don't think the Democratic memo said anything. In fact, I think it confirmed that, you know, the judge wasn't told that this was opposition research."

Earhardt pointed out that the FISA court that approved surveillance against a Trump campaign adviser was told that some of the evidence had been gathered by political operatives, but the president's son pressed on.

"What started off as a hoax, you know, Trump won the election because of Russia, has been nothing further from the truth, and they ended up finding themselves in this whole irony, and it's kind of amusing," Trump said.

Co-host Brian Kilmeade said it was troubling that Russia was bold enough to interfere in the U.S. election, and he said it had to stop.

"I agree," Trump said. "I wish Obama would have done that. If he knew, which he clearly did, I wish he would have stopped that. The big question is, why did he do nothing about it?"