Joy Behar mocks Mike Pence for news he hears the voice of Jesus: 'Can he talk to Mary Magdalene without his wife?' 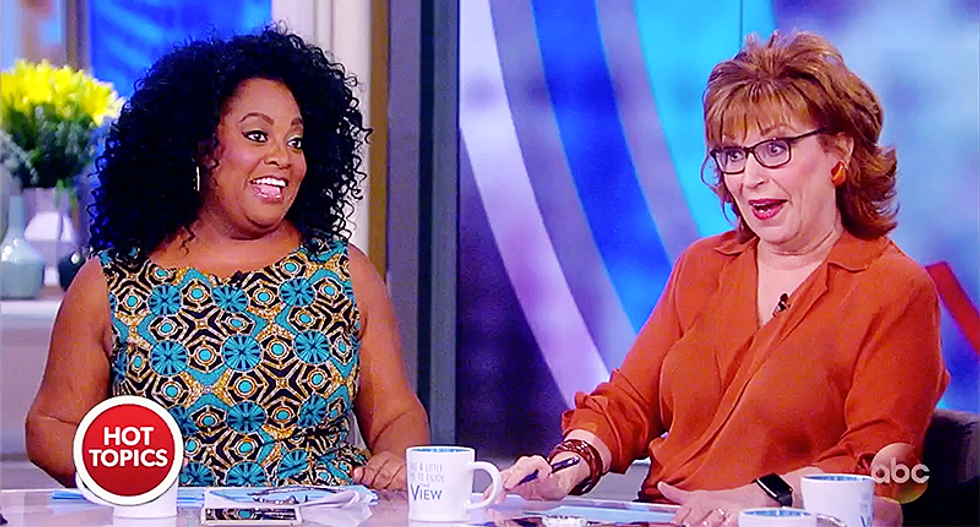 The women of "The View" couldn't help but devolve into the strange accusation from Omarosa Manigault that Vice President Mike Pence hears Jesus Christ talking to him.

Whoopi Goldberg played a clip of White House press secretary Sarah Huckabee Sanders, who berated the press for publishing leaked classified information. Goldberg wondered how the White House could take that position when they've got Omarosa blabbing all over "Celebrity Big Brother."

"She does more spin than 'Dancing With the Stars,'" guest-host Sherri Shepherd joked.

Co-host Sunny Hostin identifies as a woman with devout faith, but she was deeply concerned hearing the news about Pence.

"I went to law school in Indiana," she explained. "He is a hated figure there, actually. He's not very popular at all. And I think when you have Mike Pence, who now puts this religious veneer and calls people 'values voters,' I think we're in a dangerous situation. Look, I'm Catholic, I'm a faithful person, but I don't know that I want my vice president talking in tongues."

Joy Behar, another co-host raised as a Catholic, noted that there's often no question about people talking to Jesus, the question about Pence is whether Jesus is talking back.

"My question is, can he talk to Mary Magdalene when his wife isn't in the room?" Behar asked about Pence. He previously said that he and his wife have a rule that he won't be alone in a room with another woman.

In all seriousness, Hostin went on to clash with co-host Meghan McCain, who tried to call her colleague a liberal.

"But do we want our politics served with a veneer of religion over it?" Hostin asked. "How is the Trump administration a values-driven administration?"

"I don't see the values in the administration with Rob Porter beating his wife," Hostin said.

McCain referenced that she thought Hostin was pro-life. "In the political term of what it means it's 'valuing' life," she said. "It's an old term that has been used in politics."

"No, no, Meghan," Hostin cut in. "That's not true. Values driven means not only being pro-life but means being pro-marriage. Means being pro-values, pro-compassion, pro-empathy. So many things. It's not only about pro-life. And the bottom line is, this administration is not a value-s driven administration. You have people beating each other's wives."

McCain was presumably speaking to the way the far-right has adopted the phrase "values" to mean anti-choice, while Hostin was speaking about actual values and not far-right political demands from the evangelical lobbyists.

"I don't know how to say this in a way that doesn't sound disrespectful. If you're a liberal," McCain said gesturing to Hostin. "You have certain problems with Mike Pence, obviously. We see the world through very different veneers."

"Why am I a liberal?" Hostin asked.

McCain said that she assumed Hostin was.

"It's not a great assumption," Hostin clapped back. McCain tried to talk about various things Hostin has said on the show, but ultimately apologized if Hostin considers herself a conservative. Hostin, generally falls on both sides of issues and could easily be considered a moderate.

"I'm not in this fight today," McCain said throwing her hands up.