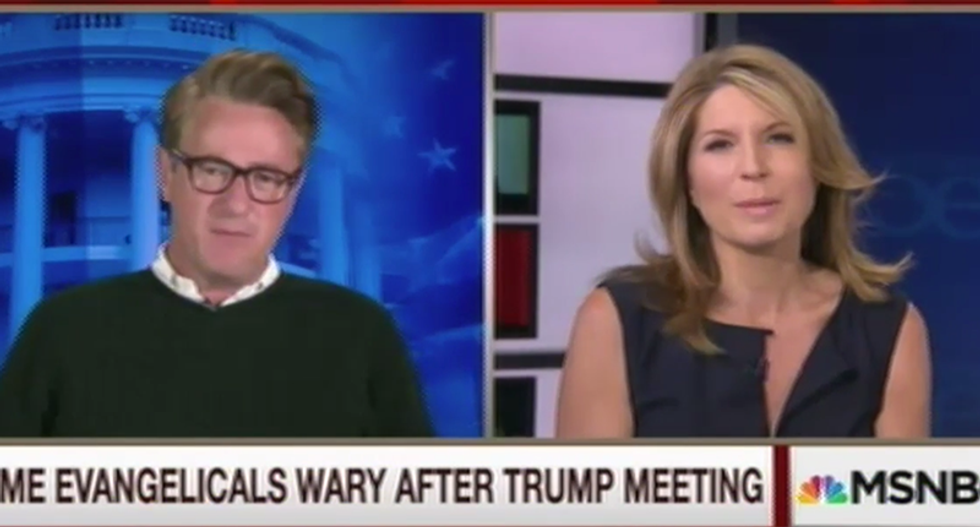 GOP presidential candidate Donald Trump doesn't have the best history when it comes to pandering to those with Christian faith. He notoriously couldn't name anything in the Bible, thinks it's a really great movie, the Bible verse he eventually came up with was one Jesus would be against, Trump never heard of II Corinthians, infuriated some religious leaders and tried to claim he was a "big league" believer in God.

Yet, a large crowd of evangelical Christian leaders came to New York City to hear Trump talk about religion on Tuesday. "Morning Joe" saw some problems in what Trump was saying, however, alleging he may have broken a few Commandments.

In a video released by Pastor E.W. Jackson, Trump appears questioning Democratic opponent Hillary Clinton's Methodist faith, claiming people don't know where she is on Christianity. Clinton has spoken out many times, specifically on how her strong faith was able to help her in the 1990s when her relationship with her husband was making national headlines.

"Morning Joe" stand-in Willie Geist explained that this isn't the first time Trump has insulted someone's faith. Notoriously, Trump questioned whether Ben Carson's Seventh-day Adventism was a real religion and he got booed in Utah when he insulted Mitt Romney's Mormon faith. Trump also attacked Ted Cruz's father, an evangelical pastor, claiming not many evangelicals come out of Cuba.

Geist cited ABC News who reported, "No one asked the question."

Fox News reporter Todd Starnes tweeted after Trump's big speech that there wasn't a single mention of Jesus Christ when speaking to the evangelical leaders.

Just got back from Trump's "conversation" with Evangelicals. No mention of Jesus.
— toddstarnes (@toddstarnes) 1466526202.0

In a press conference following the Trump meeting, a group of pastors sat on a panel to answer questions from the media. When asked by a reporter which of them were supporting Trump and ready to work for him, not a single person raised their hand.

Scarborough explained that they believe there is a holy war between Islam and Christianity that must be fought and Trump is the man to do it. "I think after that, Planned Parenthood is a footnote," he said.

Trump announced his religious advisory board, which has, among other people, failed presidential and congressional candidate Michele Bachmann.

In a preceding interview with Ben Carson, co-hosts and commentators all challenged Carson on not calling Trump out when he challenges the beliefs of other people.

Check out the full videos below: