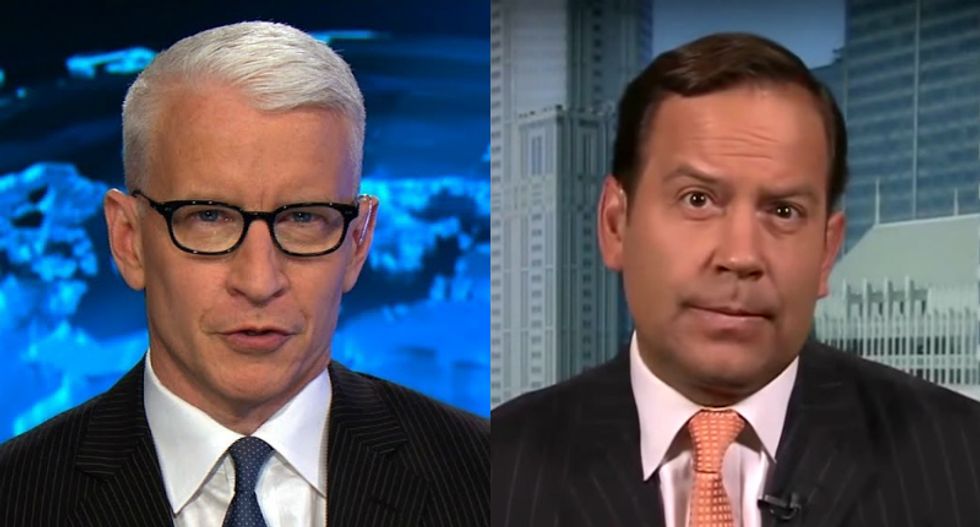 A former Trump campaign adviser was fact-checked with his candidate's own words Friday evening when attempting to downplay remarks President Donald Trump made about his former staff secretary Rob Porter, who resigned Wednesday amid allegations of domestic assault.

Ex-Trump adviser Steve Cortes initially began his defense of the president with a tangent about how well he thinks Trump has done with Latinos.

"As a brown man, who the president has, by the way, not only treated me incredibly well, but that's really besides the point," Cortes said, "he's treated my community incredibly well."

He went on to tout record lows in black and Latino unemployment.

"This continual idea that we're going to paint the president as a racist because we'd rather not talk about policy," the former adviser said, but Cooper cut him off.

"I didn't say he's a racist," the host noted. "He does defend white abusers."

Steering the conversation back to the domestic abuse allegations against Porter and Trump's statement, which mentioned neither his former staffer's ex-partners who he allegedly assaulted nor survivors of domestic violence in general.

"I think he could have been more explicit about the victims of domestic abuse and how domestic violence is never okay," Cortes said. "Please put yourself in his shoes for a moment. He doesn't know Rob Porter in that way. [White House chief of staff John] Kelly didn't know him in that way. They knew him in a professional setting where apparently he was exceptional."

"Do you need to go out of your way to then praise them for their actions in a professional setting?" Cooper queried.

"I have gone over his statements," the one-time adviser shot back. "He said it is sad for people in the White House and he knows that Rob Porter is sad as well. and that is it."

The host was not having it, however, and said "let's play it again" before his producers ran the clip of Trump speaking about Porter.

"It's obviously a tough time for him," Trump told reporters earlier in the day, "He did a good job when he was in the White House, and we hope he has a wonderful career."

He later suggested reporters must take into account that Porter "says he's innocent."

The day prior to his Friday night meltdown, Cortes also attacked The Nation's Joan Walsh and told her she is "not fit to shine John Kelly's shoes" after she criticized the chief of staff for twice defending Porter.

Watch Cooper take down the former Trump adviser below, via CNN: