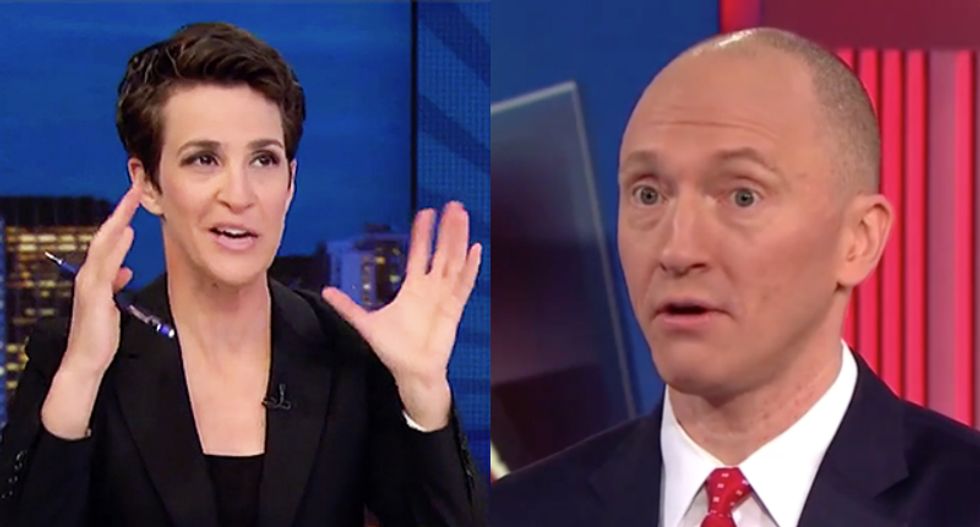 MSNBC's Rachel Maddow on Friday uncovered an intriguing subtext to the House Intelligence Committee's controversial memo released earlier in the day — that it may reveal a GOP scheme to turn former senior Trump campaign aide Carter Page's surveillance warrants into a plan to exonerate the president.

The memo, Maddow argues, fleshes out the timeline of Page's warrants that were granted by the secretive Foreign Intelligence Surveillance Court — which would mean that when he appeared in a "nutty" interview with her coworker Chris Hayes in late October 2017, he was likely still under surveillance.

"All of Carter Paige's interviews are a little nutty," she conceded, "but he said this one now very intriguing thing, not really about his own case or about Donald Trump, but about House Republicans."

"I think when the truth comes out, when Speaker Raul Ryan says the FISA warrant or the details about the dodgy dossier and what happened and all the documents surround that is gonna be released, that's what I'm excited about," Page said in the October 30 interview. "I think the truth will set a lot of people free."

"Because of the way he talks and behaves in interviews, everything Carter Page says seems fuzzy," Maddow admitted. "But what he just said there actually is what happened — and he knew about it months in advance."

Though it "just sounded like another crazy thing that Carter Page said," Maddow noted that his strange comment about Ryan and FISA warrants now seem oddly prescient.

"Months ago, there was a plan in the works that Carter Page knew about that involved Paul Ryan that they would try to use this warrant against Carter Page to make a public case to try to turn that warrant somehow into some sort of public information that presumably would be used to turn the Russia investigation into a scandal," she concluded.