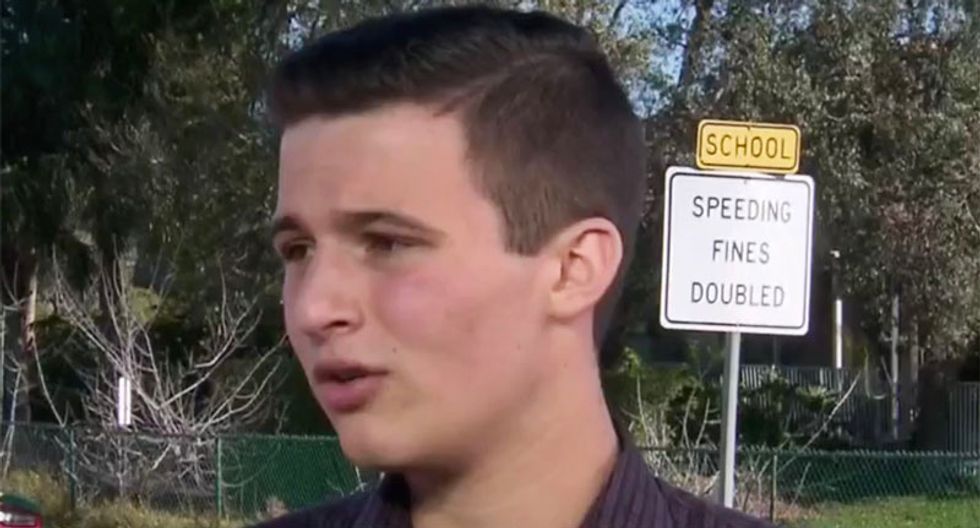 Speaking with CNN host Anderson Cooper, a survivor of the shooting at Marjory Stoneman Douglas High School in Parkland, Florida, lambasted Republicans who sell their votes to the NRA -- taking specific aim at his Republican U.S. senator and governor.

According to Cameron Kasky, there were many heroes at the Florida high school where former student Nikolas Cruz killed 17 people on Wednesday -- but he sees no heroism in the words of Republicans who only offer their "thought and prayers."

"I've never been to a school after a shooting like this where I've met so many students talking about issues of guns when so many politicians are saying now is not the time to talk about the it," host Cooper began.

"Everybody has done an amazing job responding to this: the Stoneman Douglas community, the Parkland community -- everyone is supportive and grieving and inspired," Kasky replied. "We're going to use this to try to make something better out of it."

"Do you think change is possible in terms of the kind of change you want?" the CNN host asked.

"Everything I've heard where we can't do anything and it's out of our hands and it's inevitable, I think that's a facade that the GOP is putting up," He replied before turning on the NRA. "After every shooting the NRA sends a memo saying 'send your thoughts and prayers.' This is the only country where this kind of thing happens. I've heard from other people, they don't have gun drills. We had to prepare extensively at Stoneman Douglas. This is something that can be stopped and will be stopped."

“There is a segment of this society that will shrug this off and send their thoughts and prayers but march for hours over a rainbow wedding cake” he added.

"Do you worry, a week from now when the media moves on, that this will become another in a long line of tragedies?" Cooper pressed.

"That was the thought I had. I'm not worried," Kasky stated. "This can be stopped -- this needs to be stopped."

"For those saying 'thoughts and prayers and this is not the time to talk about guns," Cooper asked.

"There is a segment of this society that will shrug this off and send their thoughts and prayers but march for hours over a rainbow wedding cake," he later added.