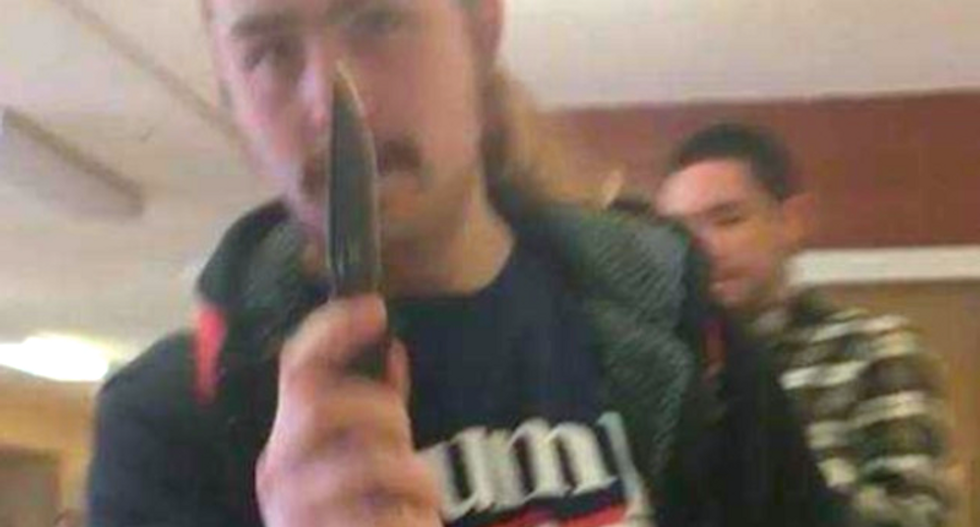 A Michigan student has been suspended for pulling a knife on immigration activists and making an apparent threat.

The activists were seated at a table at Wayne State promoting their student organization BAMN when another student wearing a Donald Trump campaign shirt approached them, reported WXYZ-TV.

The student, later identified as Corbin Steele, brandished a knife after arguing with the activists.

"I think we should deport or kill all illegals that don't belong in our country," the student says in a video posted online. "No, I'm not a Nazi."

No one was injured in the incident, but Steele, who studies engineering at the Detroit university, was placed on interim suspension.

"I don’t know if he threatened them but he violated campus policy on workplace violence. We don’t allow any weapons or any type of violence between parties," said Chief Anthony Holt, of university police.

Activists said the incident was the third altercation they'd had with Steele, who previously shouted "Make America great again" and "Kill all illegals" at them while walking past, but he had never threatened violence before.

Steele was placed on suspension while the incident was investigated.

“We remain steadfast in our commitment to building an inclusive campus community where intolerance — particularly when accompanied by physical threats — is not tolerated," said university president M. Roy Wilson.