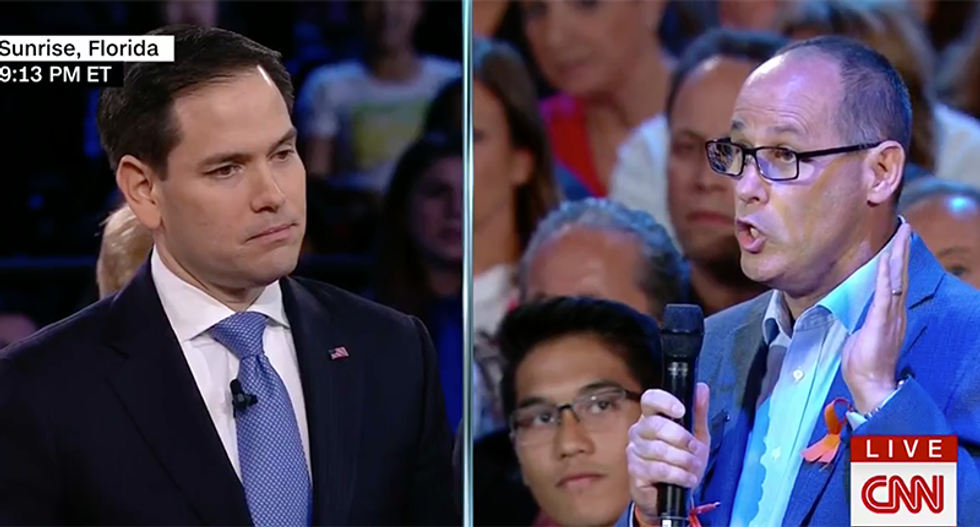 A CNN town hall on Wednesday night offered a national platform for the grief, anger and growing call for gun reform following the Feb. 14 school shooting at Marjory Stoneman Douglas High School in Parkland, Florida. Since the mass shooting, which left 17 dead, students have organized and participated in school-walkouts, pushed for gun reform and created the March For Our Lives. During the town hall, students, Florida teachers and parents questioned and pushed their elected representatives (including Sen. Marco Rubio, who was given an A+ rating from the NRA in 2016), the local sheriff and a spokesperson from the NRA on gun control, school safety, and the influence of the gun lobby.

Here are a few notable moments from the almost two-hour long broadcast:

1. Student asks Marco Rubio if he will continue to take money from the NRA

Senator Marco Rubio looked incredibly uncomfortable during the town hall, and seemed especially frustrated while speaking with MSD student Cameron Kasky. Though the exchange between Rubio and Kasky was frequently interrupted by the crowd, Kasky managed to boldly ask Rubio, “Can you tell me right now that you will not accept a single donation from the NRA in the future?”

Though Rubio tried to side-step the question, Kasky continued his line of questioning, even at one point framing the question, “in the name of 17 people, you cannot ask the NRA to keep their money out of your campaign?”

2. Parent of victim calls out Trump’s and Rubio’s responses

Fred Guttenberg, whose daughter Jaime died in the shooting, first addressed Rubio by telling him, “Your comments this week, and those of our president, have been pathetically weak.”

Rubio blinked intensely and glanced at the ground, as those in the crowd stood in applause.

Rubio spoke about ending bump stocks and improving background checks, but was ultimately booed for his dismissive comments about banning assault weapons.

Following the town hall, Rubio continued to hold steady in his position about assault weapons, tweeting:

Banning all semi-auto weapons may have been popular with the audience at #CNNTownHall, but it is a position well ou… https://t.co/de2DLsIlLv
— Marco Rubio (@Marco Rubio) 1519284404.0

When Diane Wolk Rogers was given the mic, she first honored one of her students who was killed during the shooting, Carmen Schentrup. Then she squared off with the NRA’s Dana Loesch, asking of her, like she asks of her students, to define a term.

She asked Loesch, “What is your definition of a ‘well-regulated’ militia, as stated in the Second Amendment?,” and added, “And using supporting detail, explain to me how an 18-year-old with a military rifle is well-regulated. And the world -- our country, our nation -- is gonna grade your answer.”

Loesch responded by not answering the question, but rather saying, "George Mason was one of the founders. And he said 'the militia is the whole of the people.' It's every man and every woman."

Though Israel and Loesch appeared at the same time to continue answering questions, they also argued back and forth between themselves.

Emma Gonzalez, one of the most-high profile student activists from MSD, asked Loesch a question about gun capabilities and bump stocks. Loesch’s response was primarily about the shooter and mental illness. After Loesch’s response, Israel countered:

A question from student Chris Grady, who enlisted in the Army, asked Rubio about limiting large-capacity magazines.

In one of his only clear answers of the night, Rubio stated, “I'm glad you asked that question because I traditionally have not supported looking at magazine clip size, and after this and some of the details I learned about it, I'm reconsidering that position.” Rubio went on to explain his changing mind on this issue, including that a different size magazine “...wouldn't have prevented the attack but it made it less lethal.”