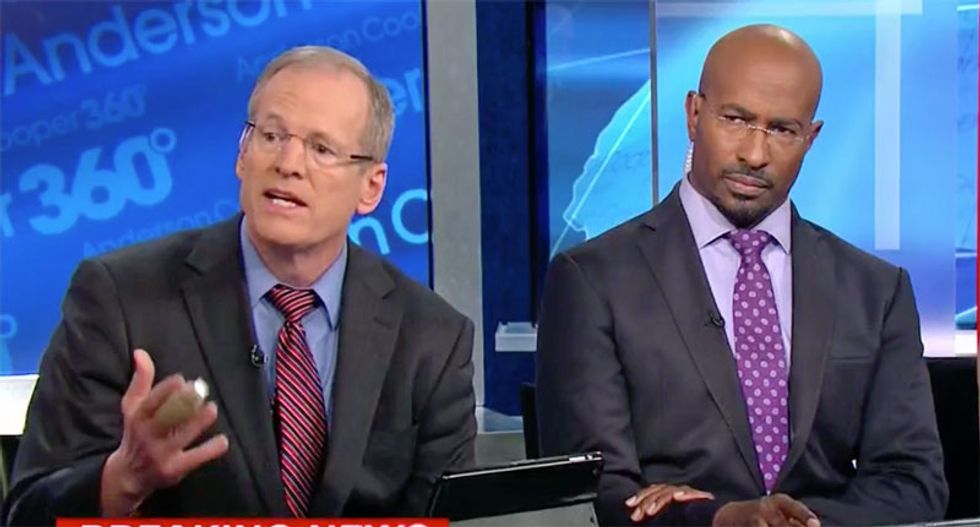 Former Rep. Jack Kingston (R-GA) went on CNN's "AC 360" Tuesday to double-down on the allegation he made earlier in the day that survivors of the Marjory Stoneman Douglas High School school shooting massacre were left-wing pawns.

"It's so tough to see the distinction between those young people who are so clear, so forthright. Disagree with them, don't like their policies, if you feel that way, that's fine," CNN contributor Van Jones explained. "But if you look at the character of these young people, how clear they are, how forthright they are, how much integrity they have, and to have that -- right up against these presidential tweets -- you couldn't imagine a more juvenile response to a mass killing of children than to use that opportunity to try to stick your finger in the eye of the people who you didn't like before, anyway."

"Those young people are better-spoken than most of us on television and they've never been on television before," Jones observed. So if there's any hope in the country, it's in this generation that's rising."

Jones added, "to stand over the bodies of children and poke your finger in the eye of your add adversary is as low as you can possibly go in public life, and it's a shame the president did that, but I'm proud of these young people."

"You think they are being hijacked by left-wing groups?" host Anderson Cooper asked.

Groans could be heard as Kingston tried to validate his conspiracy theory, by stating, " As Rahm Rahm Emanuel famously said, ‘don’t waste a good crisis.'"

CNN viewers demanded the network fire Kingston after his initial pushing of the conspiracy theory.

"When you say something like that, it's so bad," Jones blasted. "I'm going to tell you why it's bad."

"Here's the thing, it's not fair -- you're sprinkling out there, that maybe these kids are illegitimate and that's wrong," Jones concluded.