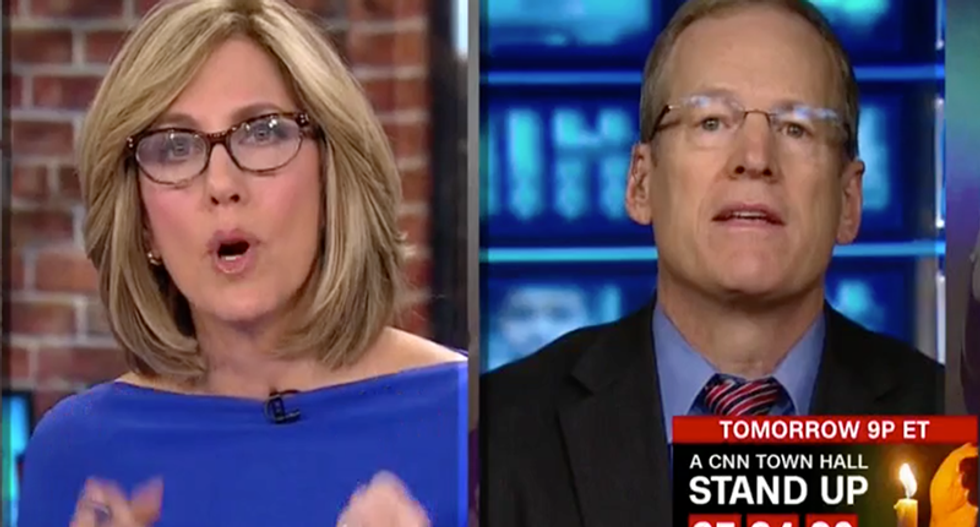 Former Rep. Jack Kingston (R-GA) was brutally smacked down on CNN Tuesday after claiming that the teens from Marjory Stoneman Douglas High School were coerced by the left-wing crusade against guns.

In wake of mass shootings, the far-right argues for "thoughts and prayers" and time to "heal" before having the debate over guns. However, survivors of the mass shooting in Florida have prompted a movement from youth fearful for their safety. The only way the right has tried to combat the mobilization is by discrediting those teens.

Such was the case when Fox News fans and Rush Limbaugh went after the teens late last week. Tuesday, CNN's Alisyn Camerota held Kingston's feet to the fire for a tweet alleging liberal funder George Soros and anti-fascist protesters are the real organizers behind the movement and using the teens as props.

Kingston argued that grieving teens aren't capable of this kind of action, but former Rep. David Jolly (R-FL) said that the only mobilization is that someone is paying for their gas on the drive from Parkland to Tallahassee.

Camerota told Kingston that she spoke to the teens before they even knew the body count from the shooting and they were already furious and ready to mobilize.

"Jack, I'm sorry, I have to correct you," Camerota said. "I was down there. I talked to these kids."

Kingston tried to interrupt the host to disagree, but she wasn't having it.

"Jack, these kids were wildly motivated," she continued. "No, Jack, no one had talked to them yet. They hadn't been indoctrinated by some left-wing group. They were motivated from what they saw and what they endured during that ordeal."

Kingston tried to claim that he doesn't doubt their sincerity.

"Yes you do, Jack," Camerota cut in, shaking her head. "This is silly. They were already doing it. They were on buses going to the state legislature today. They're 17 years old, they can figure this out."

Jolly cut in, shaking his head in frustration. "Come on," he said to Kingston. "Jack, Jack, Jack, who cares who's paying for the gas for them to get their voice to the legislators?"

Kingston tried to talk over Jolly, but he persisted, saying that the message they're working to get out has nothing to do with left-wing politics or some confiscation.

"They are suggesting that yes, there can be a constitutional right [to bear arms] but not beyond the reach of reasonable regulation," Jolly said.

Kingston then tried to claim that gratuitous Hollywood violence and bloodshed has flooded the lives of the teens and that these shootings all go toward mental health of the alleged shooter.

Camerota cut in again to remind Kingston that despite all of the regulations in place, the shooter was still able to legally buy and operate an AR-15 assault rifle.

Kingston took a condescending tone to "challenge" Camerota but she cut in to ask, "Why when it comes to gun violence you want to talk about everything except for guns?"

Kingston said that he was concerned with the facts, but Camerota asked why he seemed to be protecting the AR-15 with his "facts."

All Jolly could do is laugh at the absurdity.

"Oh, come on, Jack," Camerota clapped back. It devolved into chaos from there.

Camerota later said "these kids didn't have time to shower, much less be coopted by the DNC."