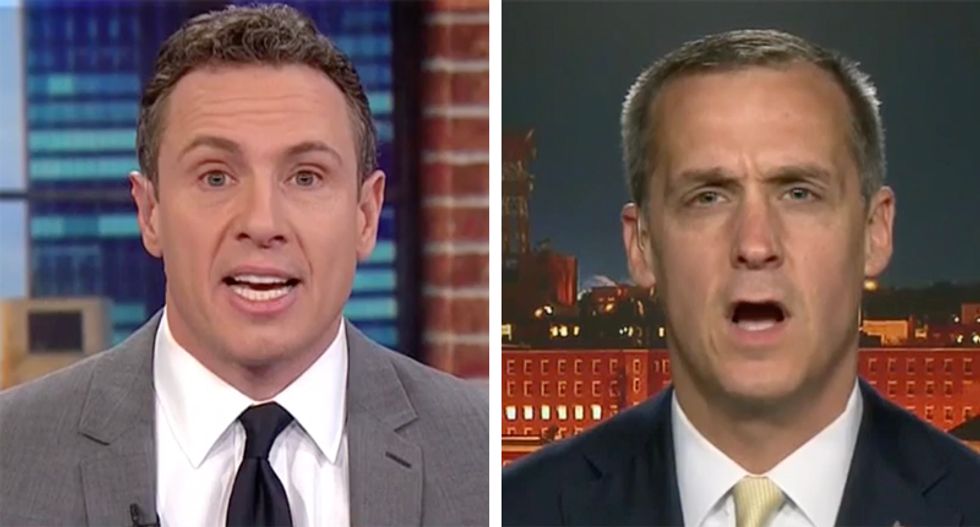 "Let me ask you one more thing, Corey," Cuomo began. " You are interested in,  and I believe that the White House is interested in, stopping these shootings, right? We all want that as a joint enterprise, right? "

"Of course, of course," Lewandowski agreed.

"I don't understand the energy that's being exerted in putting up the boogeyman that one side wants to get rid of the 2nd amendment," Cuomo continued. "That's what this is about. The president tweeted the other day and it is now percolating up in the fringes of the right. Why push that when you know there is no meaningful effort to repeal the 2nd amendment -- it seems like a tactic to keep the sides apart and not get any reasonable solutions working to this obvious problem? Why go this way?"

"I think the president's tweet was probably in response to the op-ed penned by the former Supreme Court justice who recommended the repeal of the 2nd Amendment," the Trump confidante suggested. "That is so  antithetical to everything our Constitution stand for."

"We had a former Supreme Court justice who wrote an op-ed who said we should repeal the 2nd Amendment," Lewandowski reiterated. "This is an individual who is on the highest court of the land, who is making decisions that affect every person in the United States, and now that they've left the court thinking repealing the 2nd Amendment is something we should consider."

"But he made it sound like it's a real threat, " Cuomo parried. " Do you think there is any real momentum anywhere with anyone who is a player in this situation to repeal the 2nd Amendment? "

"Look, I think when you have a former Supreme Court justice who served on the highest court in the land recommending that, advocating that, potentially influencing his former colleagues," Lewandowski insisted.

"Senator Chuck Schumer (D-NY) came out and said we don't want this," Cuomo replied. "One of the representatives of the kids group in Florida said we don't want this. It's not just Stevens -- other people have written these op-eds as well. We both know there is no meaningful energy behind this cause, we know it is all but politically impossible for this to happen. so why push it? Nobody is asking to repeal any amendment, but you guys are using it as a boogeyman."

"Somebody did ask to repeal it!" Lewandowski shot back.

"He is retired," the CNN host lectured. "It's a distraction, it keeps us apart. I just don't get it."

"This is a former member of the highest court," Lewandowski repeated.

"He is a player in this," came the reply.

"He doesn't lead an organization. He's not an elected official and there is no momentum behind any call like this in Congress," Cuomo explained to the increasingly agitated Lewandowski.

"He was a colleague of one of the nine individuals," Lewandowski repeated. "He is trying to influence those people to make decisions based on a tragedy which took place in Parkland. Whether that issue ever comes to the Supreme Court, who knows. Is he trying to influence his colleagues to crack down on gun control? Of course he is."

"Cracking down on gun control is very different than repealing the 2nd Amendment," Cuomo patiently explained.