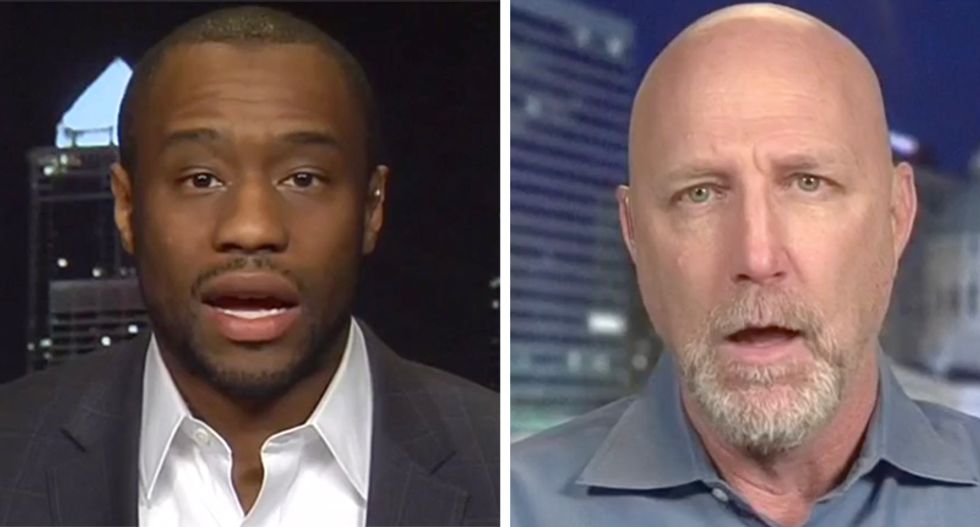 In a fiery confrontation on CNN Thursday night, journalist and commentator Marc Lamont Hill jumped all over a former cop who attempted to defend the police shooting of unarmed Stephon Clark in Sacramento last Sunday night.

The shooting of Clark, who was holding a cellphone in his hand that police claim they thought was a gun, in his grandmother's backyard has roiled activists in Sacramento and across the country who claim it is another case of police quickly shooting a suspect because he is black.

"A black man or woman who is outside is vulnerable to state violence," Hill explained before turning to the shooting of Clark. "He didn't have a weapon. The police reports were saying he had a crowbar, not a gun. The police didn't enter the chase expecting a gun, and they didn't identify themselves as police before the exchange began in the yard."

"This man was going to his own house and he was in his own yard and  this happens far too often," he continued. "There will be people saying the police thought he had a gun, and I give the police the benefit of the doubt. But too often when black people are outside, we assume they have a gun and are being a threat when they're not."

"Unfortunately people that commit crimes often times carry firearms," Klinger offered. "And I have friends that have been involved in the shootouts with people in similar circumstances responding to a car prowl situation. And so police are trained when dealing with a situation where someone is involved in a potential crime and they are fleeing from the police, that deadly force is something that is a possibility. And it's unfortunate, but police officers have been shot in very similar situations and so that is why police respond as they do with their guns out."

"I'm not sure how that's the point," Hill fired back. "No one disputes that guns could be drawn. No one is disputing that oftentimes bad things happen. No one disputes that sometimes criminals have guns. The question is: why don't you identify yourself as a police officer?"

"Well, in this situation, there is a helicopter overhead and he knew the police were there," the former cop suggested.

"Maybe he thought it was something else," Hill protested before tearing into Klinger.

"The other question is why is there such of an over-representation of black people [shot]," he asked. "We are disproportionately killed while unarmed. It's not to say police are never in danger. We often think black people are dangerous even when they're not. Toy guns become real guns, cell phones become real guns in the minds of police officers. There is something in the psyche of police, black and white, that sees black people as unduly dangerous and violent. That is what we have to get to."

"We disproportionately get it wrong with black people. We tend to see guns in black people's hands more than others and that's not a coincidence," Hill concluded.