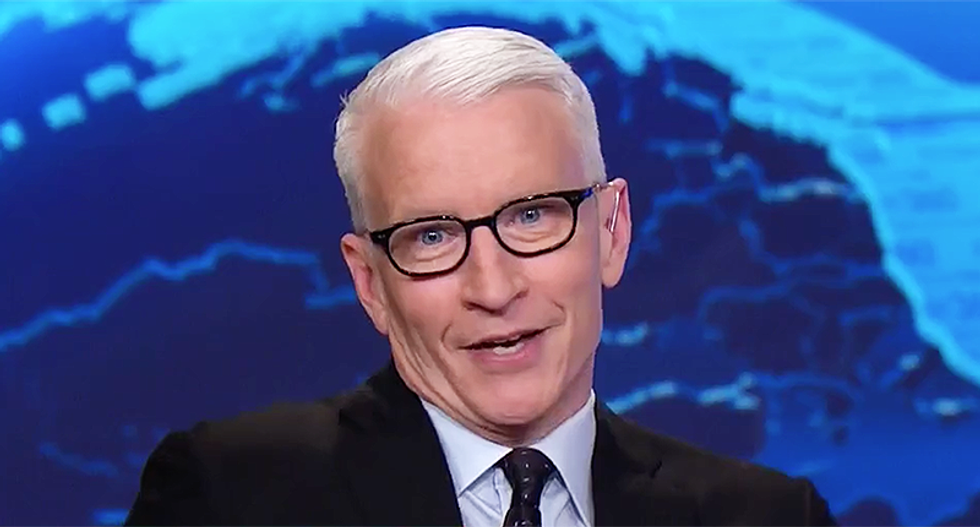 In a CNN panel discussion, host Anderson Cooper brought up President Donald Trump's recent tweet touting his new border wall that is going up all thanks to him. It marked the second time the White House was caught in a lie about what is an existing border fence put in place by former President George. W Bush.

In the four photos Trump tweeted out, he called them "the start of our Southern Border WALL!"

First, the "wall" is actually a fence. Second, the fence was replacing an existing fence that needed to be repaired. The funding for the project came during the Bush administration. Attempting to cover for Trump's flub was unofficial apologist Bryan Lanza, who claimed this fence is just the first step in building Trump's wall. They're putting up the fence before building the wall.

Trump economic advisor Stephen Moore tried to claim that there wasn't a fence "with huge gaps in it."

"But that's not true, that's pretty much the exact same wall that's being replaced," Cooper said. "They're just replacing it, they're not building --"

Moore cut in to say that he had been to San Diego eight or 10 years ago and "not only was there not a wall there wasn't even a fence and people would -- you know, go right through the holes in the fence."

Interestingly, Moore said that there "wasn't even a fence" before describing how people would go through holes in the fence he had just said didn't exist.

"To that point, the president has not started to build a wall in that part of where you were in San Diego," Cooper noted.

"Well, he's said that he wants a wall all the way across--" Moore replied before being cut off.

"But it hasn't started. It hasn't actually started, correct?" Cooper said. "They're just replacing a wall, which is what they do for replacing old fencing what is what they've been doing --"

"Well, he can't build the wall if he doesn't have the money to do it," Moore said.

"But he's claiming he is building the wall," Cooper noted. "I mean, that's what he's saying. So, isn't that weird?"

"Well, the wall is being built," Moore tried to claim after saying Trump doesn't have the money to build the wall. "But they don't have enough money to finish it. That's the point."

"It's not being built," Cooper said again. "Where, actually, is the wall being built in the ground that is actually -- well -- I mean --"

Christine Quinn cut in to note that the so-called "wall" is not being built.

"I mean, they've put up prototypes to look at them," Cooper said. "But they're not actually building a new wall. Am I going crazy?"

The non-Trump affiliated people on the panel reassured Cooper that he was not, in fact, going crazy.

"He just sees a chicken as a penguin but it's still a chicken," Quinn said.

"I mean, this is what Donald Trump does," cut in Peter Beinart. "He says stuff to himself in his head when he lies constantly."

"The lie is that this is the beginning of a new wall when this is just routine maintenance of a fence that was --" Beinart began before Moore cut him off.

"But that's because the Democrats won't allow him--" Moore began.

That's when the panel devolved into absolute chaos. As is frequently necessary for Trump allies on cable news, a fact check reveals that Republicans are, in fact, still in control of all branches of government. That includes the U.S. Congress, which recently passed the budget that Trump signed.

All Cooper could do at that point was shrug and appear to mouth "I don't know what he's doing," into the camera.