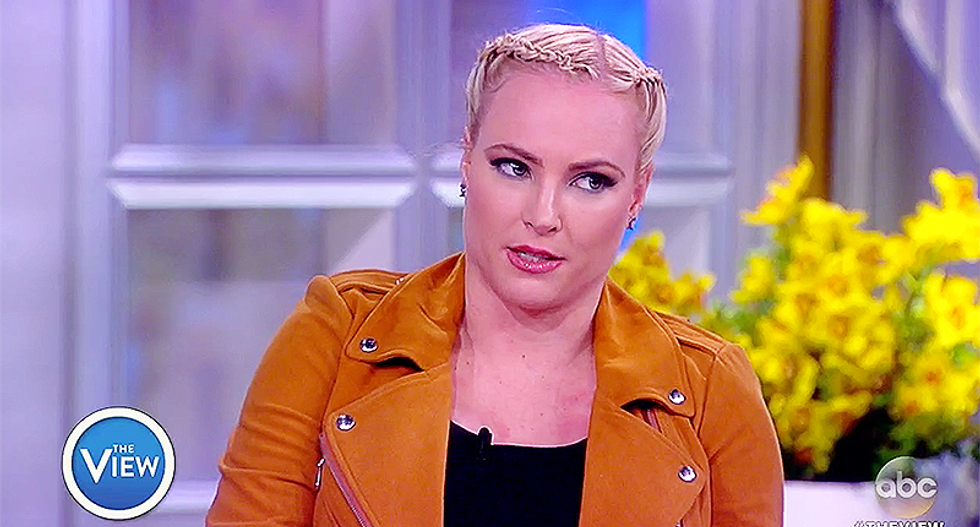 Students across the country walked out of class Wednesday and Whoopi Goldberg heard them chanting as they walked by "The View" studio. She raced out to join them for a few moments as they shouted, "We want change!"

During the discussion about gun violence and the demand for safety, most of the panel of women were encouraging of the conversation about gun regulations. To her credit, Republican Meghan McCain tried to stay out of the discussion.

"You know, today is one of those days -- I'm a big Second Amendment person, NRA member, this is one of the moments I don't think it's my turn to talk," she said. "Everyone knows where I stand. I don't like the idea that somehow if you're a Second Amendment person that you're for gun violence. I do wonder if there are kids in Texas or maybe rural parts of the country who use guns to hunt or self-protection in one way or another."

Her fellow co-hosts cut in to explain that no one is talking about getting rid of the Second Amendment and that it's a myth that somehow there are people out there that support gun violence.

"I think that it sometimes it gets mixed up, that maybe you're less empathetic, you're less hurt, you're less somehow affected by school shootings in one way or another," McCain said of those opposed to gun regulation. "No law abiding gun owner wants anything like this to happen ever again, but there's a lot of nuance in this subject and nothing divides america more and I felt it so much, being especially on this show, especially being the only person that I think comes from gun country."

The women also cut in to explain that her assumption wasn't accurate. Goldberg confessed that she is a gun owner and has talked about that fact for years, much to the detriment of her own career.

"These kids are saying, 'Listen, we just want you to know that there's a lot of gun violence and we want it to stop,'" she continued. "'You're the adults and we expect you to fix this.' I think that's what this is about."

Even progressive commentator Joy Behar explained that when she lived out in the woods with her very young children reading "In Cold Blood," by Truman Capote, she wanted a handgun to protect herself.

McCain pivoted back to it being a difficult time for her.

"The CNN town hall, I thought was a huge step backwards," she said. "I felt bad for the way it was handled. I thought it was really inappropriate and I want to have more conversations that are civil.

Sara Haines explained that there's room for everyone on this issue. But McCain complained about the "very vehemently anti-NRA" students at Parkland, who are getting more attention.

The conversation devolved into one about assault weapons. Haines noted that the other side of the argument is frequently that any regulations on guns means that someone is anti-Second Amendment.

"Even my own father that I mentioned behind the scenes, he said that the problem is they're going to take away the Second Amendment," she continued.

"I think the kids are saying, we have an issue and we want you to deal with it," Goldberg said again.

McCain said just the concept of arming teachers is a complex issue but gets jumbled in the disagreements. However, she disagreed with co-host Sunny Hostin who wants to see AR-15s and other military-style weapons banned. She claimed she knew people who hunted with them.

Goldberg again cut in to say that it has nothing to do with what the students are saying.

Guns Activism Video
Report typos and corrections to: corrections@rawstory.com.
Like this article ? Text `Support` to 50123 to donate.
READ COMMENTS - JOIN THE DISCUSSION