‘Most painful press briefing ever’: MSNBC’s Mika laughs out loud at Sarah Sanders tap-dancing around Russia 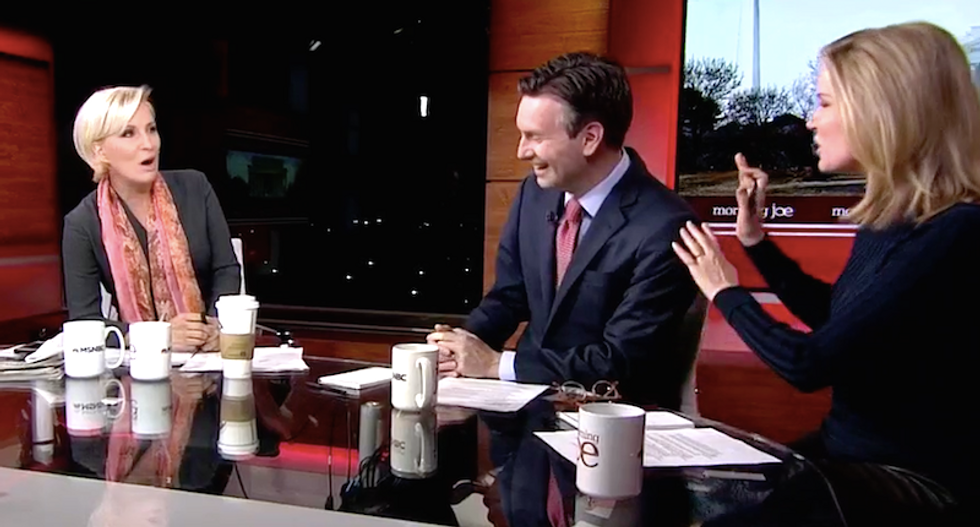 Former White House spokesman Josh Earnest described why former President Barack Obama's congratulatory call to Putin in 2012 differed from Trump's, which was made over the all-caps recommendation of his national security advisers -- and Brzezinski said he was too kind.

"What you don't see is me and Katty (Kay) smiling mockingly because you are the most polite person to ever grace this set," Brzezinski said. "You call it 'rather remarkable.' That was the most painful press briefing I've ever seen in my life."

The "Morning Joe" co-host and Kay, a BBC anchor, burst into laughter before Brzezinski explained why Sanders' performance Wednesday was so painful.

"She wouldn't answer the question as to whether the Russia election was free and fair, and what you saw was edited for television because we don't have a lot of time," Brzezinski said. "She actually asked -- she asked the reporter to repeat the question so she could spend some time to think about how to BS her way out of it so she could please her boss and not the country. Think about it this way."

Earnest, who served as White House spokesperson from 2014 to 2017, said Sanders had put herself into a position of defending the fairness of Russia's presidential election -- and he tried to put Trump's call into historical context.

"You obviously point out it doesn't come against the backdrop of the election meddling," Earnest said. "You also don't have a president of the United States, President Obama was somebody interested in strengthening NATO. President Trump has gone around criticizing our NATO allies and, in some cases, putting distance between us and our allies, including with regard to this specific poisoning of a Russian spy in Britain."

He said the circumstances of the two presidential calls were also different.

"I remember that phone call from 2012, and this was some internal gnashing of teeth about the fact that President Obama did call to congratulate him, but you had a statement from the State Department raising legitimate concerns about the way that that election was conducted and about the broader human rights situation inside of Russia," Earnest said.

"So the president of the United States in 2012 in a very different circumstance, we still found a channel," he added. "We did find a mechanism for raising concerns about that election. The Trump administration has for whatever reason not done that, and still what you've had is you've got senior officials taking matters into their own hands to raise their own concerns even over apparently the objections of the president."