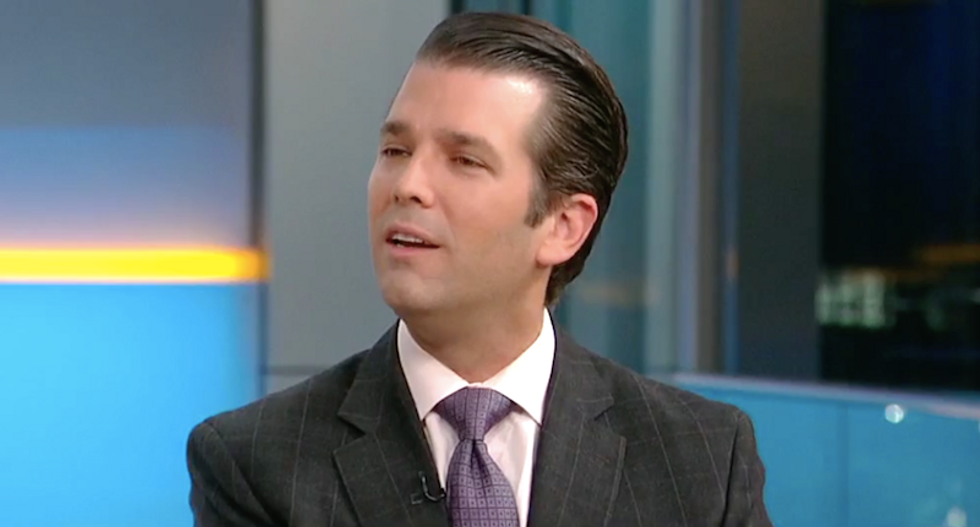 Donald Trump Jr. complained Democrats had politicized the House Intelligence Committee investigation into Russian election meddling, and the president's son said he was relieved by findings announced by the panel's Republican majority.

Trump Jr. appeared Tuesday morning on "Fox & Friends," where he claimed vindication after the committee's GOP leadership issued a one-page statement claiming no evidence of collusion or wrongdoing had been turned up against the Trump campaign.

"I'm not surprised, I have known this all along," Trump Jr. said. "This something that we have dealt with for two years, and what I really want to know is how much money, time and resources were spent on this witch hunt by the Democrats simply because they couldn't believe that Donald Trump won -- that's what it is."

The president's son, whose meeting with a Russian lawyer promising damaging campaign information against Hillary Clinton has placed both him and his father under scrutiny by the special counsel, said any investigation going forward was partisan gamesmanship.

"They will never give it up because they need it, it's their only talking point for '18," Trump Jr. said. "They need that to exist, just like the media needed it -- they went all in with this crazy notion."

Trump Jr. echoed GOP claims that the Clinton campaign and the Democratic National Committee colluded with law enforcement, but he was careful not to paint his attacks with a broad brush.

"The good thing about it is, the only thing we found out is the other side colluding with the DNC," Trump Jr. claimed. "Colluding with the 7th floor with the FBI, the lawyers at the top, not the boots on the ground guys. They are the ones doing all the shady stuff, that stuff is disgusting. While it was a huge pain, I'm glad it actually happened because it uncovered what was going on in this country, and I think that's scary stuff."

The Fox News hosts agreed "zero evidence" of collusion had been found, and he praised the Senate Intelligence Committee's investigation as more credible.

“At Senate Intel, I was impressed,” Trump Jr. said. “Those guys actually seemed like they were trying to get the facts. When I look at House Intel and other groups, it was literally about looking for a sound bite.”

"The real problem is the double standard and how those things are prosecuted," he said. "If the Democrats do it, it's okay -- it's not a big deal, it doesn't matter. If a Republican does it, I mean, can you imagine the outcry, the outrage -- they would be on there going crazy. As Republicans, we have to start fighting the game like them. I'm all for fair fights, we take this high ground while they are running all over us. While they are lying about it and pushing it and leaking. We have to start playing the game like they do until they start playing fairly."