WATCH: MSNBC’s Mika delivers epic takedown of all the ways Trump is ‘unfit to lead’ 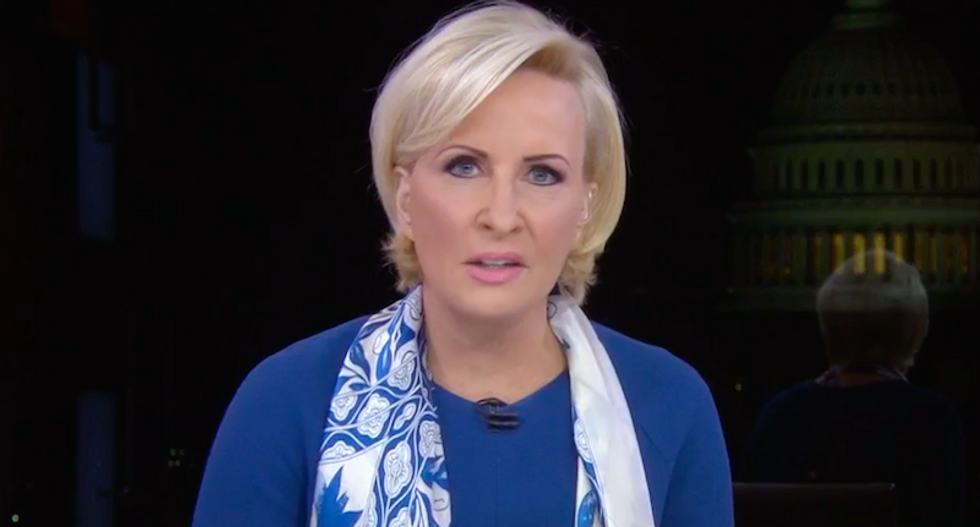 MSNBC's Mika Brzezinski said Republicans were faced with a clear choice on President Donald Trump, whose latest bad week once again showed that he was "unfit to lead."

The "Morning Joe" host said GOP lawmakers were standing on the sidelines as Trump signaled he would fire special counsel Robert Mueller, cozied up to Russian president Vladimir Putin and showed he was at risk for blackmail by various women he'd paid off for sex.

"While most Republicans are playing politics with and not sure whether they can succeed with or without Trump, let me lay out for you the questions that we're dealing with just this week alone," Brzezinski said. "The question as to whether or not the president will fire Bob Mueller. That is front and center right now, and people high up in the administration and people high up in the intelligence community are deeply concerned will happen."

"We've been watching over time this president's confused relationship with his attorney general," she continued. "His deep misunderstanding that the attorney general does not work for him, that he works for the country. The president has shown that he does not understand this concept, he can't get his head around it and he's abused that relationship."

"The question definitely is coming to a head as to whether or not this president can be blackmailed," Brzezinski added. "It is clear to so many people that he has some problem with Russia, that Vladimir Putin has something on him, that he and his press secretary or his stooges can not say anything disparaging about Russia in any way for fear that something might come out."

"A lot of people feel that is a reality at this point, and then it's his relationship with women, and several women coming forward and saying they had affairs with the president, but affairs aside, they say they were threatened, abused by the president," Brzezinski said. "Did it happen by his people during his presidency, during his campaign? These stories are coming to a head and one may come out on '60 Minutes' this Sunday. This is all on the president's plate right now. What you see in tweets that come out with misspellings, with urgency, with a sense of unhinged impulsiveness, and you have to be wondering especially if you're in the intelligence community if this president is so impaired and so subject to blackmail that he's unfit to lead."

Brzezinski said every action and statement the president makes shows that he's panicked, and that he can't handle the responsibilities of the job.

"You want to think like the president? Watch TV and watch his tweets," she said. "It's unbelievable, frightening and terribly childish. I would watch cable news, watch our show, watch his tweets. It's literally A, B and C."

"He comes here for what's really going on," Brzezinski added. "He really wants everybody to like him. They don't, and it -- it actually gets to his head. Meanwhile, we have our entire country's place in the world at stake."