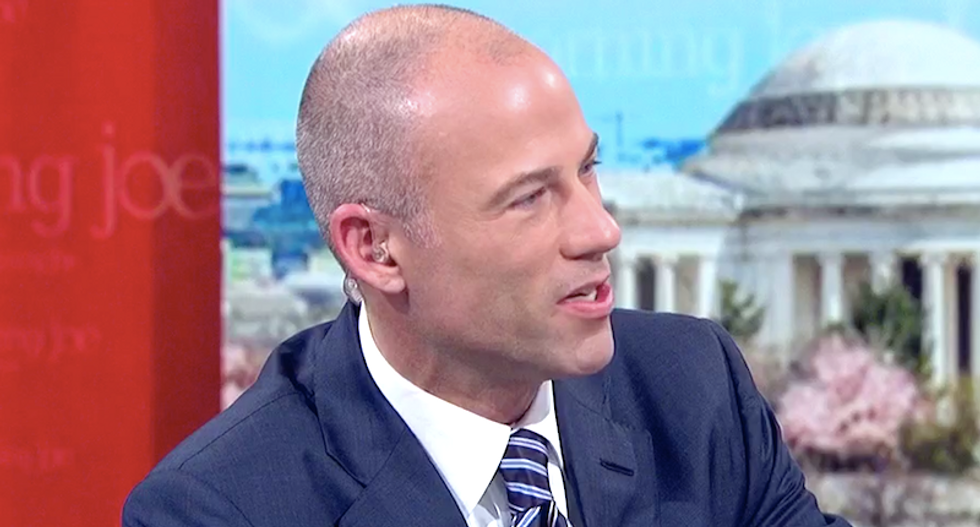 Attorney Michael Avenatti appeared Thursday on MSNBC's "Morning Joe," where he gave a wide-ranging interview on the lawsuit against the president and a related criminal investigation of Trump's personal lawyer Michael Cohen -- and he said reporting on the case had missed an important detail.

"So, Mika, you are familiar with the fact that a week ago, Judge (Kimba) Wood ordered Michael Cohen's attorneys to disclose all of his clients for the last three years," Avenatti said, "and there were three clients listed -- three clients listed. Do you recall which three?"

Brzezinski listed Trump, Fox News host Sean Hannity and Republican donor Elliott Broidy -- but Avenatti said she was making the same mistake everyone else had.

"No, no, no," he said. "Mr. Trump, the Trump organization and Sean Hannity. Mr. Broidy was not disclosed in open court as one of Michael Cohen's clients."

Co-host Joe Scarborough asked the attorney what that meant.

"I think at some point we are going to find out, if in fact, the client in connection with the ($1.6 million) settlement was, in fact, Mr. Broidy. I'm going to leave it at that."

Avenatti wouldn't say it, but the implication seems clear.

Cohen negotiated a $1.6 million hush money payment to a Playboy model who became pregnant during an affair and then had an abortion.

News reports had identified Broidy as the client who agreed to pay the woman in installments over two years if she agreed to remain silent about the relationship -- but Avenatti said Cohen's lawyers ruled him out in open court.

That would leave Trump, or possibly Hannity, as the likely clients who arranged the payment.

Broidy resigned earlier this month as deputy finance chairman of the Republican National Committee after the payments were reported.