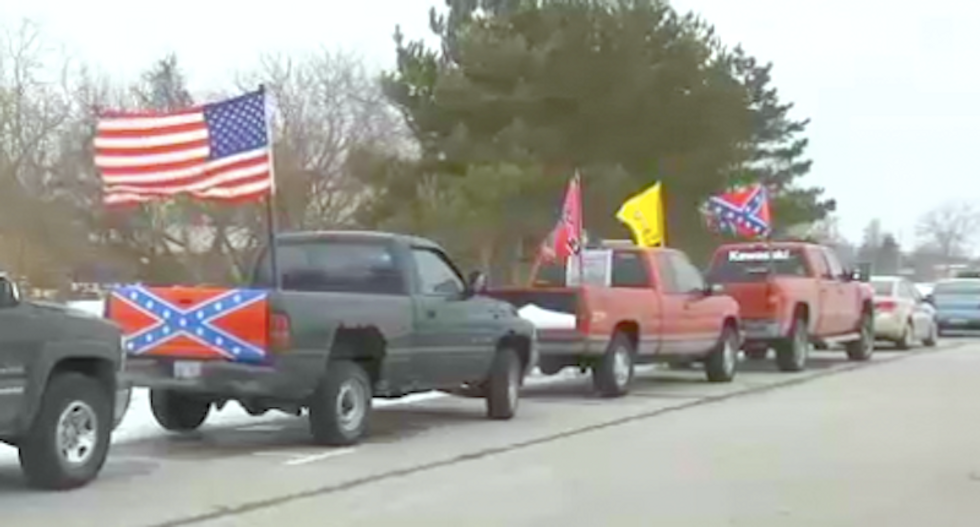 The demonstration in Auburn, which is more than 95 percent white, began Tuesday with six trucks but swelled Wednesday to dozens of pickups bearing Confederate flags and Gadsden flags associated with the tea party movement, reported MLive.

A few counter-protesters showed up with rainbow flags as a show of support for LGBT rights, and Bay County sheriff's deputies stood by in case violence broke out.

“That flag does not stand for the Confederacy, it stands for racism -- and those kids know that and the parents know that,” said Lahoma Buckley, whose grandson is one of the school's only black students.

The teenage boy told relatives that classmates used the Confederate flag to taunt him at school, reported WNEM-TV.

"He told me that this kid stuck the Confederate flag under (his) nose today and said, 'Someone gave me five bucks to show you this,' and just before that another student says to him, 'Do slaves have feelings?' And then uses his name, (that he) doesn’t have feelings," Buckley said.

The boy's football teammates have also taunted him with racial slurs, Buckley said.

“They were calling him the N-word,” Buckley said. “Everyday he goes to school with his stomach in knots not knowing if he’s going to be confronted with someone trying to push his buttons again today.”

She said the teen loved his school despite the abuse and felt supported by teachers, but she asked other parents to consider what the Confederate flag symbolizes to her grandson.

“If your child put a flag in his pocket, on his belt buckle, on his truck or whatever today, to show strength or force or whatever, you need to take another look at what you’ve allowed him to do or her -- because you’ve humiliated my grandson,” Buckely said.

City and school officials say they're monitoring the Confederate flag demonstration, but they say they can't do much about it.

"I'm not saying I'm supporting it or for or against it, but people in this country have to start realizing we have to tolerate all peoples' views," the mayor added. "That's preached a lot out of Washington and a lot of other places, but it's not practiced. Democrats don't like Republicans' views and Republicans don't like Democrats' views. People have to grow up and need to respect other peoples' views."

The mayor and school officials said they aren't sure whether the flag demonstrations are racially motivated, but the school's few black students say they have proof.

"If the motive was to intimidate, that was wrong," Kilbourn said. "Trying to intimidate by race, color, creed, political belief, or religious belief is wrong. We have to respond to that in the right way so that the right message gets out.

Kendall Frost, a 17-year-old junior, showed MLive screen shots of social media taunts by white classmates who say she and other black students "shouldn't go to Western because of our skin tone."

A Snapchat video taken by another student and shown to MLive shows at least students in a vehicle taking part in the flag demonstration swearing and using racial slurs.

"We do believe in freedom of speech," said Frost, who said her car was blocked in by two trucks flying Confederate flags. "If that is how you want to react and go with your life, that's on you, but there are racial comments coming with the flags being up. They're not putting them up because they believe in anything -- they're putting them up because they know we don't want them up."

Classes were canceled Thursday at Western over threats officials believe may be connected to the demonstration.