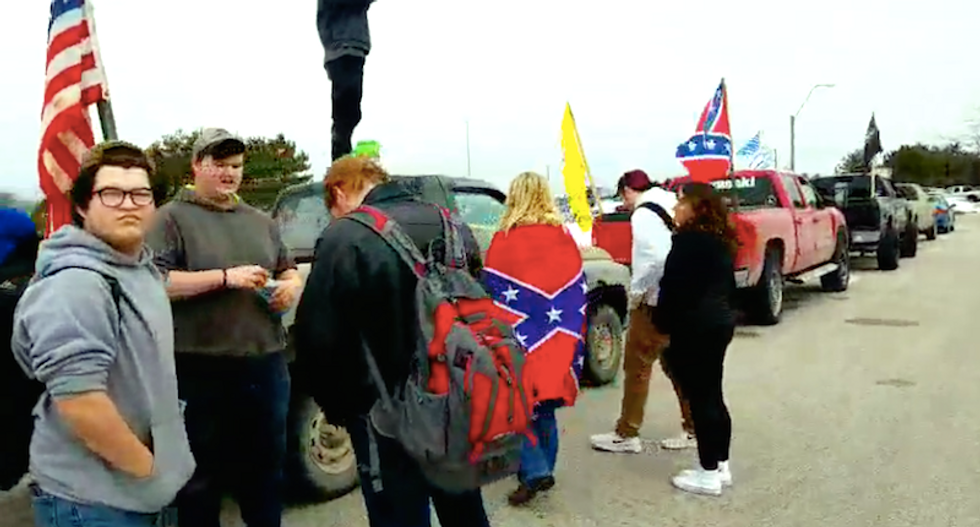 Classes were canceled Thursday due to a threat made against a Michigan school that has been surrounded all week by pickup trucks flying Confederate flags.

Superintendent Stephen Bigelow called off school after he was notified around 6 a.m. of rumors that people were coming to the high school to confront students, reported MLive.

It's not clear which students were threatened in the rumors circulating about the confrontation, but the school's few black students say they were frequent targets for harassment before the Confederate flag demonstration -- which city officials and school administrators say they're powerless to stop.

"It's racism," said Kendrix Szilagyi, a student who organized a counter-protest. "We understand that (officials) can't stop them but something needs to be done. We have such a small minority population of students and we're in a conservative area. We're a white-majority school. It's making some of the students and people feel uncomfortable and unwelcome."

The demonstration has brought national attention to claims of racist bullying at the school, where the handful of black students say they've been subjected to racial slurs and called "slave."

Bigelow said the school is investigating racist social media threats and harassment, but he said officials were prohibited from discussing punishments -- which he said gave the false perception that no actions are being taken.

“This frustrates the community," the superintendent said. "When we talk about what type of discipline or what student got what discipline, that’s information that we’re never able to share."

Students and administrators agree that some of the pro-Confederate demonstrators are not Western students -- but some of them are.

"It's not about racism, it's a country boy thing," said Cameron Myers, who waved Confederate flag -- and told a reporter the symbol has been present since the founding of the United States. "If we were going over there and saying racist slurs and cussing them out, that would be another thing."

A Snapchat video taken by a Western student and shared with reporters show at least three students driving as they record the flag demonstration, and one teen mutters "f*cking n*ggers" as on-screen text reads "Fly em high boys."

Although the situation has drawn national attention, some Auburn residents say they haven't paid much attention to what's going on at the high school.

"I think there's other stuff in life to worry about," said resident Mary Williams, who graduated from Western. "Kids are going to be kids. We just want sunshine."