Kamau Bell and Don Lemon drop a truth bomb about Starbucks and racism: ‘This is how black people are treated’ 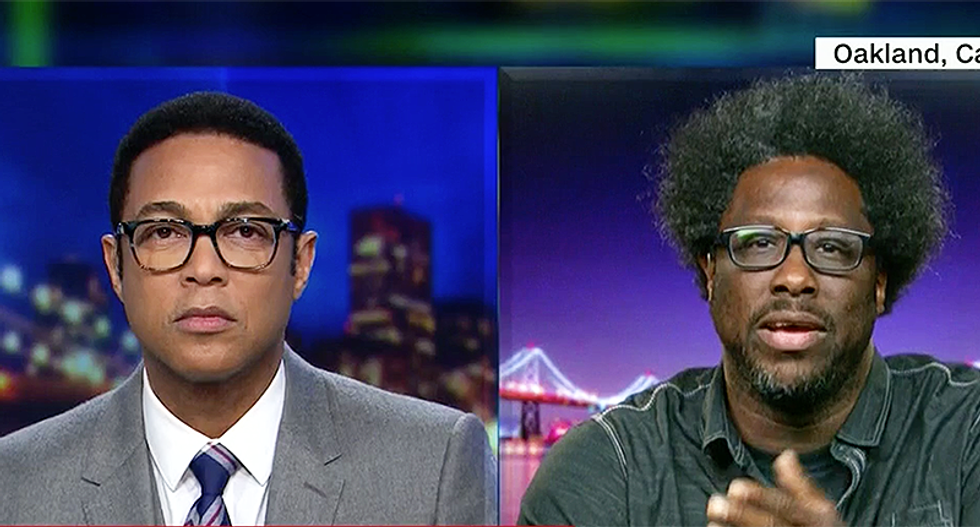 In a Tuesday interview with CNN's Don Lemon, Emmy Award-winning comedian and documentarian W. Kamau Bell confessed that while in Berkeley, California, he was asked to leave the Elmwood Cafe. He noted the incident was just one of many that people of color face at establishments all over the United States.

"I got kicked out because they thought that I was 'harassing' my wife and my 13-week-old baby," he recalled. "And I talked the my wife about a minute. I met her and a friend at this coffee shop. They told me to leave because someone had complained about me being there. I was afraid they would call the cops."

Bell was referring to an incident that happened over the weekend where two black men were arrested after walking into a Starbucks to meet friends and not yet ordering a beverage. The incident occurred while white customers were doing the same. The manager has now been transferred to another store, though not fired, and the CEO of Starbucks flew to Philadelphia to personally apologize to the men.

"No one called the cops. No one mistakenly thought you had a gun, but did you worry about those things?" Lemon asked.

He explained that many African-Americans and Latinos experience this kind of racism every day. Bell was concerned because it was 2015 when police had just killed Michael Brown.

"Here's the thing that is so sickening about it, is because my wife was right there, who is white and she goes 'That's my husband, we are together. I'm his wife.' I think that probably her white skin actually probably took some of the heat out of situation, which is sad, but true," he said.

After the incident, Bell and his wife and the owner of the cafe had a community forum with activists to discuss racism at a local school in Berkeley. There were promises made about fixing things, but nothing has happened, so Bell complained online. The owner of the store eventually blocked Bell on Facebook as did the cafe.

"That's why we have to talk about Starbucks," he said. "It's a much bigger company than this Elmwood Cafe. They are just going to wait for the heat to die down and go back to business as usual. This is about how black people are treated in this country. This issue is linked to the black teenage boy who was shot at when he was asking for directions."

He noted that it happens everywhere and noted "you can't get more liberal than Berkeley, California." However, he urged people not to buy into the alt-right fantasy that Berkeley is some bastion of liberalism. It's not as much as people think.

"I heard the police commissioner talking in the previous segment," Bell continued. "They are acting like the situation was successful because the black men didn't get mad and the cops didn't get mad. Those black men were held in custody for almost nine hours. How is that a successful situation? If they had led them out of Starbucks and let them to go on their way with their friend maybe, maybe that's successful. But they actually took them into custody for nine hours. This is -- that can't be success."

He noted that a person can't wipe their memory of being in jail for nine hours and the fact that they must now get their record expunged. Because the incident was videoed and so many people complained that were in the store, the men will forever be known for this incident, and it will never disappear for them.

"So they are in the system because they were processed even though they let them go," Lemon explained.

Bell went on to say that the conversation can't be about it being a Starbucks issue, when it's actually an issue with America in general.

"Until America, and specifically American white people are willing to confront and participate in America's history and legacy of racism and current day racism, like the white woman who took the video did, we are still going to be here," Bell said. "We will be here in a year talking about another coffee shop."

Lemon noted that when they talk about these issues he gets complaints from whites claiming he's "race baiting" or when he has several people of color on his show whites ask for "diversity."

"I'm like, you should be applauding me for having these African-Americans on TV," Lemon said about those who've attacked him.

Bell agreed, noting that typically political commentary is one white man talking to another white man about what's happening to the diversity of America. He said that Americans should stop thinking about this as something that Starbucks needs to fix and instead understand it's something Americans need to fix.

Starbucks is closing 8,000 stores for a day for mandatory training to educate employees on racial bias.