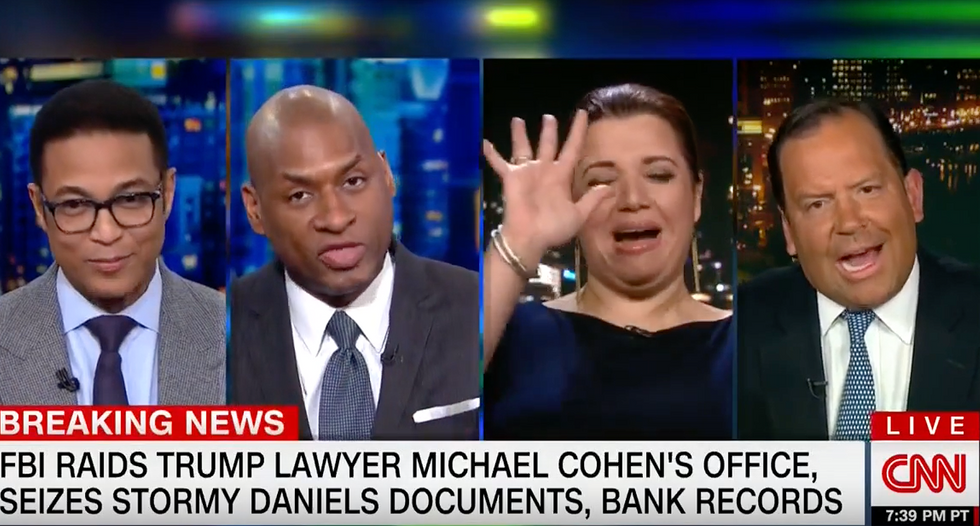 A CNN panel on Monday devolved into chaos after Steve Cortes, a member of Donald Trump’s Hispanic Advisory Council, melted down over the FBI’s raid of Michael Cohen, calling special counsel Robert Mueller’s Russia probe a “sham investigation” that’s “trying to usurp the power of the presidency.”

Cortes was reacting to Trump’s anti-FBI rant, which followed reports that Mueller referred Cohen to federal investigators, prompting a raid on the longtime Trump attorney’s residence and office.

“This is an outrage!” Cortes claimed. “What were we promised by the Mueller probe? We were promised Russia. And what do we end up with here? Sex and a tawdry tale from 12 years ago, far from when Donald Trump ever thought of being in office.”

“Can I stop you there?” CNN’ Don Lemon asked, noting the raid on Cohen’s office is separate from the Russia investigation.

“That's disingenuous, Don, let's be honest,” Cortes said. “Your show and this network for months and months have screamed, ‘Russia, Russia, Russia!’ Guess what? There's nothing there that connects to President Trump.”

Asked how he knows there’s nothing there, Cortes argued “20 lawyers, biased lawyers who hate the president” have used “tens of millions of dollars” and the full investigatory power of the United States government” and still haven’t found anything.

Lemon noted that many of the people running the Russia investigation are Republicans who “were hand-picked by the president of the United States,” prompting Cohen to retort, “being a Republican hardly means you're in favor of President Trump.”

“This is a sham investigation!” Cortes continued. “This is his own Justice Department trying to usurp the power of the presidency.”

Cortes then claimed the special counsel is creating a “witch hunt atmosphere that's really, in many ways, reminiscent of what we see in dictatorships,” arguing Mueller is guided by a desire to “impeach the president of the United States.”

“That's quite a tale you weave there,” Lemon replied.

“It's quite a tale and it happens to be the truth,” Cotes said. “It's why the president needs to take action.”

“Are we done now?” political commentator Ana Navarro asked sarcastically. “I’m one of those true Republicans that can't stand this president because he has hijacked the Republican party, and he has hijacked democracy. That being said, frankly, Don, the Trump apologist on this panel has sidetracked so much, I kind of forgot what your original question was.”

Navarro said it’s “appropriate” for Cohen to be investigated because “one of the things that distinguishes us from many other countries is that in this country, nobody, not the president of the United States or his minions or his personal lawyer or whomever, is above the law.”

“I actually marvel at the fact that Donald Trump has gotten as far as he has gotten with his limited intellectual curiosity, vocabulary of about a four-year-old, and the worst damn lawyer that any of us have ever seen,” Navarro said. “[Cohen] couldn't even get an NDA executed.”

“You've been demeaning the president in this manner for so long,” Cortes complained, before Navarro called him out for controlling the segment and not allowing fellow panelist Charles Blow to speak.

Blow began to speak about the “hoops” the FBI would have had to “jump through” in order for Trump’s “witch hunt” narrative to be true, but Cortes immediately jumped in.

“It's a lot of hoops, but Don, I want to know, what happened to Russia?” Cortes asked. “Where did Russia go?”

“Why are you talking, why does he keep talking?” Blow asked. “He’s been talking this whole time.”