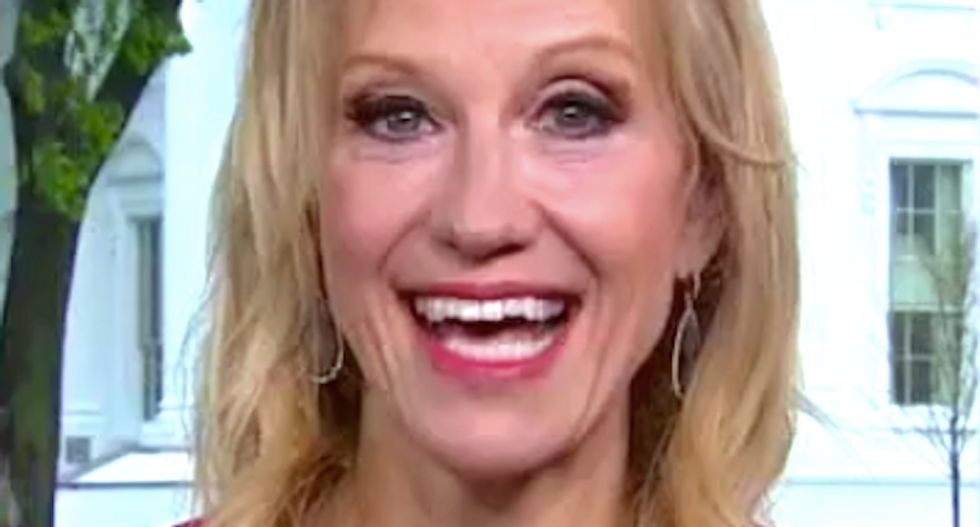 Kellyanne Conway says President Donald Trump wants to make regular appearances on "Fox & Friends" -- where he potentially created a mountain of legal problems for himself this week with a rambling interview.

The White House adviser appeared Friday morning to clean up after the president, who undercut some of his own legal arguments and tossed longtime attorney Michael Cohen overboard.

The interview has dominated coverage since it aired Thursday morning, but Fox News barely mentioned the president's appearance -- which the co-hosts cut short despite Trump's willingness to continue to generate newsworthy statements.

"By the way, I know our producers were working for a very long time to set that up," said co-host Steve Doocy. "Thank you very much for making that all happen, it was great."

Many viewers noted that the "Fox & Friends" hosts seemed to grow increasingly alarmed as the president ranted against the media and his political enemies, and contradict arguments made by attorneys in civil and criminal cases involving his associates.

"The president wanted to do that," Conway said. "The president had a great time bringing his case to the American people, as he does on social media and these bilateral Q&As and certainly on the South Lawn and press pool sprays and other interviews, and the president said he would like to perhaps come once a month as news breaks."

Doocy yelped and started applauding, although the best grim-faced co-host Brian Kilmeade could muster was, "that would be great."

"Pretty much a monthly basis," Conway said. "Back in the private sector he was on every week, every Monday. At certain times, same time every weekend, he was going through 15 or 20 minutes of his view on policy. Many people went back to listen to the interviews for clues as how he might govern as the president and his issues of the day."

Conway praised her boss for clearly articulating his views on important issues, although the president spent much of his time singling out his critics on television and then insisting he was too busy to watch.

"You see that consistency, that unbroken thread between some of those interviews and much of the policies today," she said. "I had to credit him yesterday, I said, 'You didn't even put a semicolon in there -- you covered so much territory,' that he leaves the rest of us cold in terms of our analytical and conversational skills. The president was able to cover so much ground with you yesterday and appreciated the platform because it connects him with the American people, not just on Fox News, but at that really was the buzz around the globe yesterday in large part, because everybody had to replay your clips. That must have been delicious."

Kellyanne Conway announces that Trump wants to go on @foxandfriends once a month 🍿🍿🍿 pic.twitter.com/ZLS7MADg0I