Maher stands up for striking educators: 'Teachers should make more than the night manager at Game Stop' 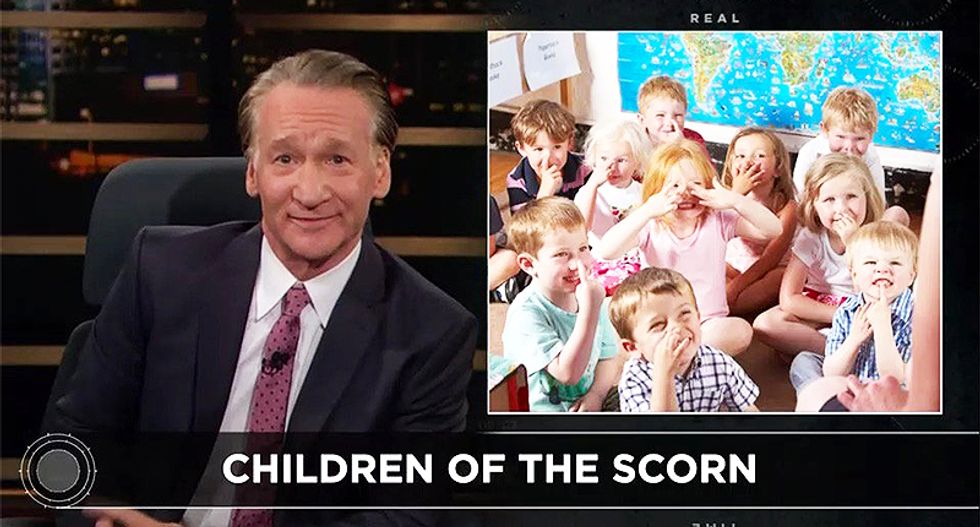 HBO host Bill Maher is no friend of children. Not only does the comedian not have them, he doesn't want them, and generally has no desire to be around them. But when it comes to the future of the United States, he does want them to be educated and productive members of society. Otherwise, he noted they might end up like Don Jr. and Eric Trump.

In his Friday "New Rules" commentary, Maher mentioned the teacher who recently posted a photo of her pay-stub that revealed she makes a little over $300 a week.

"We pay such lip-service to kids, 'They're the future,' 'Our greatest natural resource,' 'We'll do anything for them,'" Maher continued. "And then we nickel and dime their teachers? IF we really think children are our future, shouldn't the people who mold their minds make more than the night manager at Game Stop?"

He mentioned the recent strikes and walkouts that have taken the country by storm. From West Virginia to Kentucky and Oklahoma, teachers are demanding not just better pay but a better investment in education.

"Teachers are tired of being told of what Sarah Palin once said of a teacher, that 'her reward is in Heaven,'" Maher quoted the former vice presidential candidate. "Maybe, but the rent is due here on Earth."

Maher asked how people, even those burdened by taxes, can justify what is done to teachers.

"We were all kids once," he said. "We remember our teachers. We have those moments of early life imprinted in your brain. It was your first mentor. Your first role model. If you grew up in Florida, your first lay."

Maher argued that instead of giving teachers guns we should "give them a living wage." He read off the hateful comments that have come from Republican lawmakers over the past few weeks. Republican Kentucky Gov. Matt Bevin called the strike a "thug mentality."

"It's about just straight up wanting more than your fair share," Bevin said of some of the lowest paid teachers in the United States. Oklahoma's GOP governor went on the attack as well, then doubled down when asked if she wanted to explain the remarks.

"So, true," Maher mocked. "When I think greedy, the first thing that comes to mind is a public school teacher, who takes the bus to work and spends her tax refund on crayons."

Maher wondered if Americans really cared about children they wouldn't have allowed an Education Secretary like Betsy DeVos "who needs to stay after class."