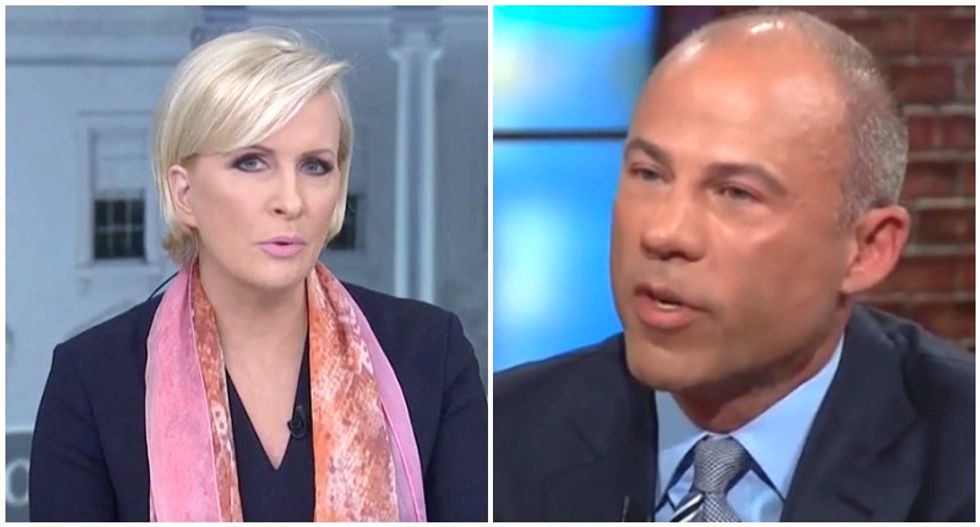 Attorney Michael Avenatti hinted that a Playboy model may have been paid off on behalf of President Donald Trump, and MSNBC's Mika Brzezinski asked a legal analyst to explain what that means.

Brzezinski pointed out that Avenatti also revealed at least one other had come forward with credible claims about Trump, although the attorney declined to offer specifics, and she asked MSNBC legal analyst Danny Cevallos to explain.

"Are we looking at potentially another woman and another payoff?" Brzezinski asked. "One that might be a lot higher? What do you make of Michael Avenatti's tips that he was putting out on our show?"

Cevallos said he couldn't be sure what Avenatti meant, saying the attorney was a "master of the tease."

"He's had these sketch drawings that we've sort of ruminated over, but ultimately it's hard to say what Michael Avenatti really has in his pocket in terms of additional witnesses or possible people complaining against Trump," Cevallos said.

Brzezinski said the attorney had specifically referenced a $1.5 million payout to a former Playboy model, which has also been reported as $1.6 million, and said statements in open court cast doubt on claims the payment was facilitated by Cohen on behalf of Broidy.

"The last time he specifically mentioned something like Stormy Daniels was threatened, it ended up being the focus of a '60 Minutes' piece, so you have to wonder," she said. "You don't just drop a number like that as a tease without something to back it up, or do you, perhaps?"

"Remember (special counsel Robert) Mueller referred this to the Southern District of New York because of the potential payoff issues to Stormy Daniels," he said. "You may remember Michael Avenatti has raised issues of extortion with these contracts, that these women were forced to enter into these agreements on pain of threat, so the potential criminal charges, we could guess at them all day but there definitely is a large spectrum of potential criminal liability which, by the way, in the Cohen matter, must have been demonstrated to a neutral magistrate in order to get that search warrant in the first place."