Seth Meyers launches a passionate defense of Michelle Wolf: She made 'fun of people in power who lie to us on a daily basis' 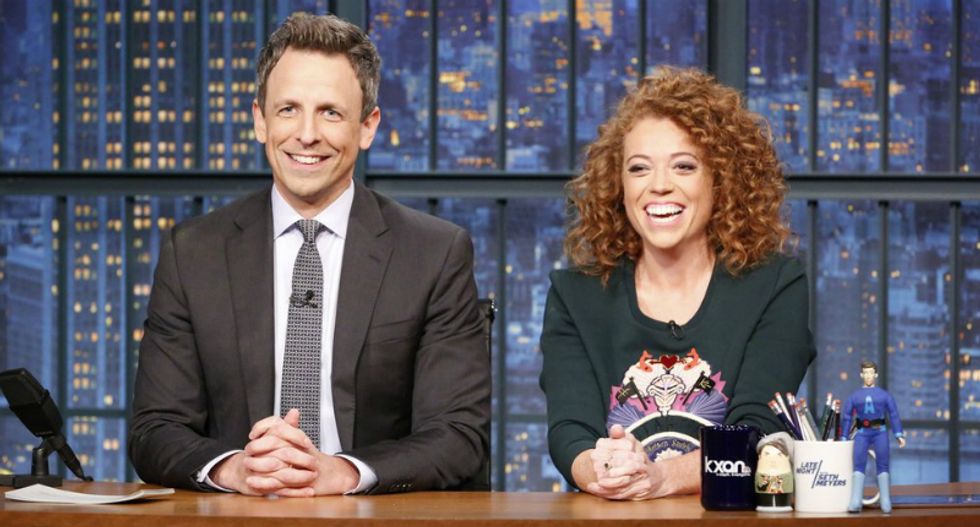 After Michelle Wolf's headline-making monologue at the White House Correspondents Association's annual dinner, President Donald Trump called her out without naming her — and as Seth Meyers, who he did name, noted, his characterization is not far off base.

"The White House Correspondents’ Dinner was a failure last year, but this year was an embarrassment to everyone associated with it," Trump tweeted Sunday night. "The filthy 'comedian' totally bombed (couldn’t even deliver her lines-much like the Seth Meyers weak performance). Put Dinner to rest, or start over!"

The White House Correspondents’ Dinner was a failure last year, but this year was an embarrassment to everyone asso… https://t.co/lhm2FrUyS2
— Donald J. Trump (@Donald J. Trump) 1525055880.0

"It's always nice when the eye of Sauron is upon you," the Late Night host joked.

"Michelle Wolf doesn't need anybody to defend her," Meyers said of his former employee, "but she is our friend. So just know when you call her filthy: you are right. She is filthy and she is mean!"

To explain his consequential agreement with the president, Meyers played a clip in which Wolf, dressed as a grown-up version of little orphan Annie, said she intends to get a sex change operation — by having sex while facing people.

In her new show, premiering on Netflix at the end of May, Meyers said that much like in her now-controversial WHCA monologue, Wolf "is not gonna waste any time trying to decide when it is and isn't proper to make fun of people in power who lie to us on a daily basis" — a jab at media reactions to the comedian's jokes about White House press secretary Sarah Huckabee Sanders.

"I can't stress this enough," the host said. "Michelle is so mean. I was her boss and she made the meanest jokes about me all the time. She's been gone for two years, but I still jump when I see a redhead on the street."

Watch Meyers' hilarious defense of his former colleague below: