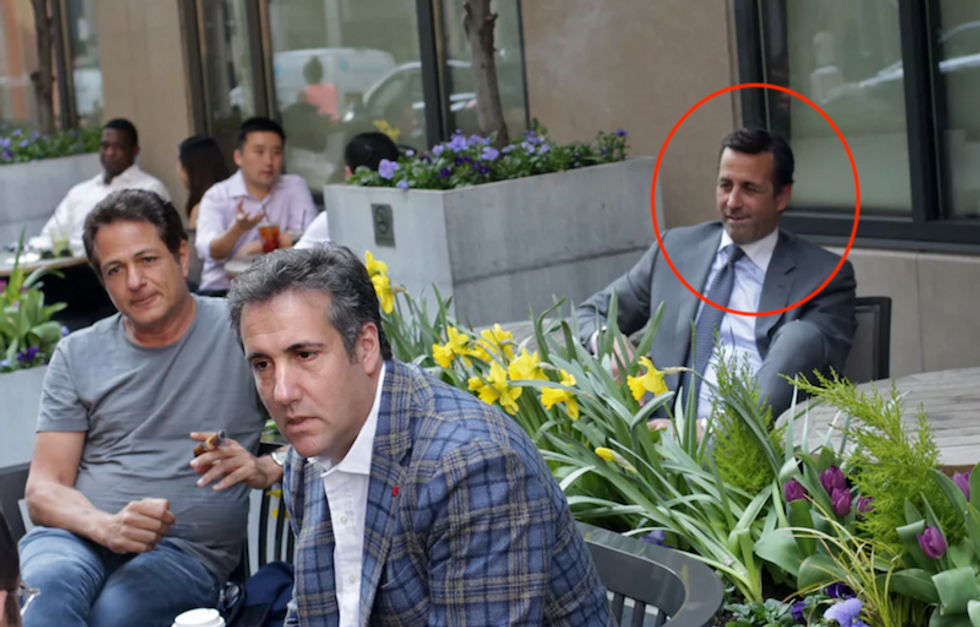 Michael Cohen with his friend Jerry Rotonda (in red circle)/Screenshot

One of the buddies who President Trump's lawyer Michael Cohen was hanging out with on Friday afternoon was charged with harassing and threatening a black parking attendant, The Guardian reports.

Rotonda was in the back of the group that was seen outside the Loews Regency hotel on the upper East side of Manhattan on Friday afternoon, at the same time Cohen’s attorneys were in court trying to seal documents seized from him by the FBI.

In December 1998, Jerry Rotonda, who is now an executive at Deutsche Bank and who owns an apartment in Trump World Tower, was charged with violating the civil rights of Shirlene Pierce.

Pierce, who is black, had placed a $20 ticket for an expired meter on Rotonda's luxury car and he reacted by abusing her with racist statements and threatening to run her over.

“I hope I see you crossing the street so I can run your n----- ass over,” he said, according to press reports from the court case at the time.

Rotonda told Pierce not to come to to his neighborhood, “where decent people live," and instead  to "Go back to Dorchester where monkey n------ live."

A judge found that there was "sufficient basis" to find Rotonda guilty but then allowed the case to be continued for a year without a finding. He was supposed to pay her $5,000 and apologize in front of her co-workers.

Prosecutors appealed the lenient sentence and in the end his lawyers were able to assure that he received no punishment at all.