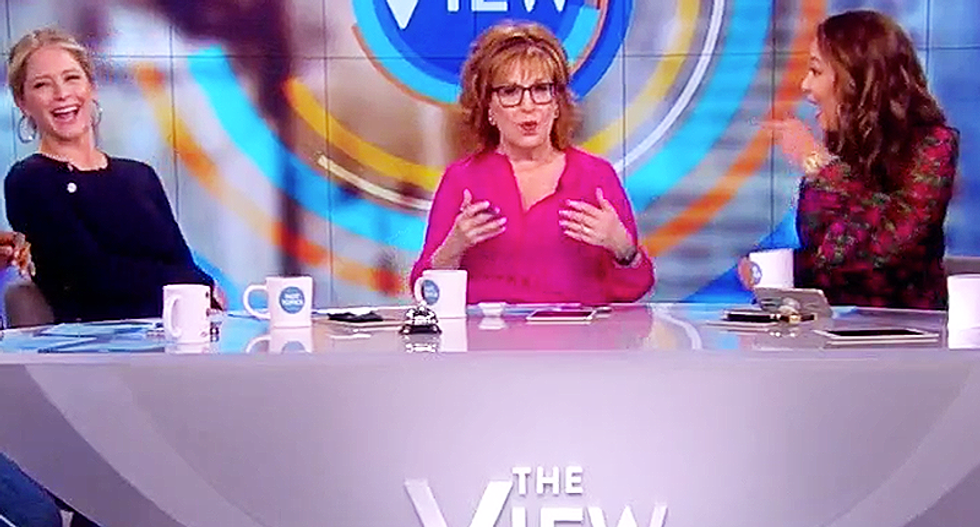 CNN's Dana Bash interviewed senior White House advisor Kellyanne Conway and asked what was meant to be a light-hearted question about Conway’s husband, who has become known for tweeting out anti-Donald Trump tweets. Conway went off in a full-on attack against Bash for asking the question.

The women of "The View" all agreed that it reeks of hypocrisy given Conway and President Donald Trump spent 2016 attacking Hillary Clinton for things her husband Bill Clinton did. The same can be said for Trump's attacks on Ted Cruz's wife and Andrew McCabe's wife. George Conway was once a lobbyist in Washington, D.C. and he was up for a position as solicitor general for the new administration.

"I think the fact that the husband's tweeting, that's a public forum," said co-host Sara Haines. "So, I think when when you are putting yourself out there on social media in a public account, then you are free game. He's not new to politics. Am I wrong in saying he was a lobbyist? So, he's kind of in the game too."

"So, when you have someone like that with a political background, a legal background that comes out on Twitter, I think it's perfectly fair game," Hostin said. She also explained she didn't think it was a "gotcha question" and was "really slimy on Kellyanne Conway's part."

She also explained that she knows Bash personally and professionally and that she is a "lovely" person who is "honest" and a "great journalist."

"If I recall, maybe I'm wrong, [Conway] lost no opportunity to talk and discredit the clintons, Hillary and Bill and his peccadillos from way back," said co-host Joy Behar. "She was right there with that one. It's really rich to hear how defensive she was."

Meghan McCain, who is also married to a publicly political person said that politics needs to decide whether or not women are accountable for their husband's actions. She explained that as a couple, they discussed how to handle these issues and that she and her husband disagreed that they are not responsible for each other's statements.

"I think this is very different because, to Joy's point, she was -- Kellyanne was fine doing it to Hillary Clinton," Whoopi Goldberg cut in to say. "But the difference between, for me, is that if your husband is clearly tweeting out that you're in a position that he thinks with people who are not that great, he has inserted himself into your gig. He's writing specifically about your job. So, if your husband were to tweet specifically about your gig, then it becomes fair game for people to ask."

Behar explained that if Conway had a sense of humor she could have made the whole thing into a joke response and taken the light-hearted moment for what it was.

"All she has to say is, 'I tried to tie him up.' It would have been so much easier!" Behar joked.