WATCH: Morning Joe panel stunned by professor's passionate case to 'get out' of Syria 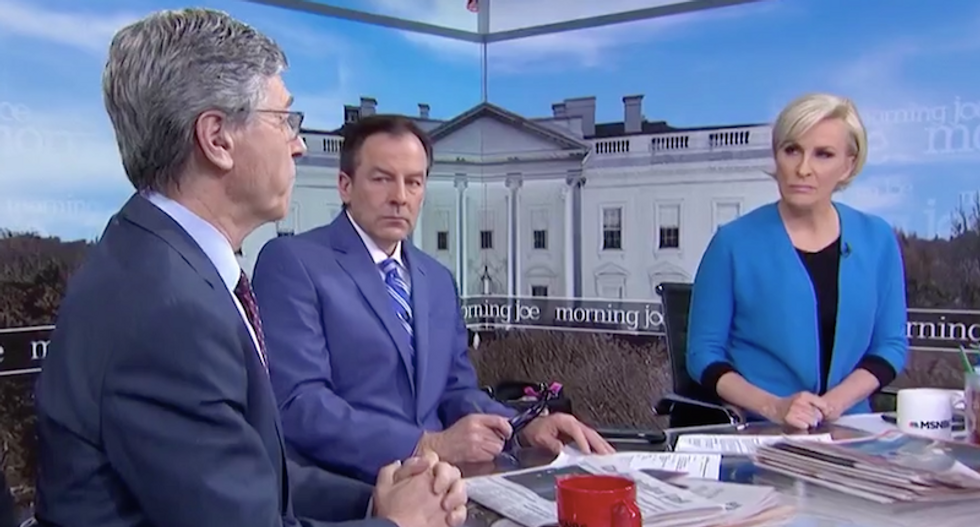 As President Donald Trump tweets Syria provocations, it's almost a foregone conclusion the U.S. will escalate its military response to the ongoing civil war -- but one expert told MSNBC's "Morning Joe" it doesn't have to be that way.

Jeffrey Sachs, professor of sustainable development and health policy at Columbia University, has been calling for an end to the U.S. military presence in Syria for years, and he stunned other panelists with his passionate call to leave the war-torn nation.

"I think we have to step back and not put it in partisan terms," Sachs said. "This is a U.S. mistake that started seven years ago. I remember the day on your show when President Obama said Assad must go, and I looked at you and Joe and I said, 'Huh, how is he going to do that? Where is the policy for that?'"

He said the plan to overthrow Syrian president Bashar Hafez al-Assad using covert methods was a "disaster" that opened the door to Islamic State militants and Russia, and Sachs said the U.S. had compounded its original mistake by remaining involved.

"What we should do now is get out and not continue to throw missiles, not have a confrontation with Russia," Sachs said. "Seven years have been a disaster under Obama, continuing under Trump. This is what I would call the permanent state."

Sachs said the CIA and Pentagon have waged a proxy war in Syria that has killed 500,000 people and displaced 10 million more -- and he said the disaster was completely predictable.

"I predicted it seven years ago, there was no way to do this and it would make a complete chaos," he said. "What I would plead to President Trump is, get out, like his instinct told him."

He said the elite media and military-industrial establishment warned Trump that leaving Syria would be irresponsible, but Sachs said the president was right to urge Obama to stay out.

"His instinct is right, get out," Sachs said. "We have done enough damage, seven years. Now we really risk a confrontation with Russia that is extraordinarily dangerous -- reckless."

"I don't think it's attractive, but we have to understand how this happened," Sachs said. "This happened because of us. These 600,000 are not just incidental. We started a war to overthrow a regime, it was covert. It was Timber Sycamore, you can look it up, the CIA operation, together with Saudi Arabia, still in secrecy, which is part of the problem in our country."

"A major war effort, shrouded in secrecy, never debated by Congress, never explained to the American people, signed by President Obama -- never explained -- and this created chaos," Sachs continued. "So just throwing more missiles in right now is not a response."

Sachs said he agreed with Stavridis that American troops could not simply withdraw and leave Syria to tumble into further chaos, but he argued that the current path was just as risky.

"That is where this war continues because we to this day back a government contrary to international law, contrary to the UN Charter, contrary to common sense, contrary to practical path -- we can't do it," he added. "It's creating ongoing crisis to the extent of facing an imminent confrontation with Russia."