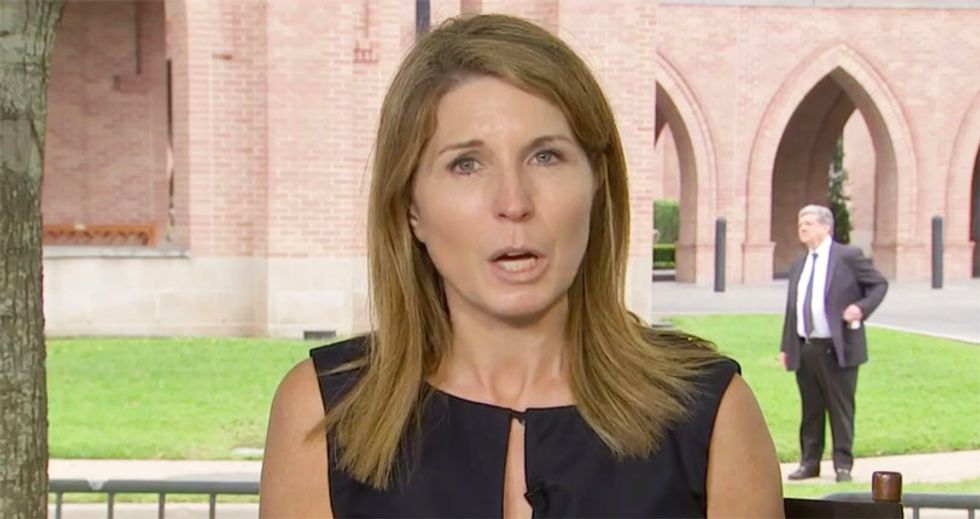 Speaking from Houston, where she attended the memorial service for former first lady Barbara Bush, MSNBC host and former White House Communications Director Nicolle Wallace appeared to take a dig at President Donald Trump's absence at the gathering, noting presidents from both sides of the aisle made it as a symbolic gesture of unity.

Speaking with host Brian Williams, who was in the studio, an emotional Wallace praised the service after it was pointed out that President Trump was reportedly going to watch the proceedings from his Mar-a-Lago resort while his wife, Melania, attended.

Turning to Wallace who was speaking outside following the service, Williams said, "I am so glad we heard from you about what we witnessed," referencing the preceding coverage, then adding, " Also we got to see all the familiar faces, all your former co-workers, your friends of a lifetime."

"I don't know how many more times in our life we are going to see the Obamas next to the Clintons next to two generations of Bushes. And there's just something about being an American and seeing all those presidents -- two former Democratic presidents, two former Republican presidents in one room to honor one human being that just transcends absolutely everything else we're living through," she said, seemingly in reference to the Trump presidency.

"Everything else we're living through feels survivable when you see those four families in one room together," Wallace continued. "They just weren't in one room, they were in one row. I know you watched it, but to see all of them together and to understand that only the 41's -- which is what we call George H.W. Bush and Barbara Bush, they're the 41's as opposed to the 43's George W. Bush and Laura Bush -- only the 41's would have reached back to the man that defeated him, the Clintons, and forward to the man [Obama] who came after their son and formed such meaningful bonds."

"These aren't phony friendships, these aren't shallow bonds," she insisted. "These are deep bonds. It is President Obama who awarded 41 the Medal of Freedom and it's Bill Clinton -- we joked so much in the 43 White House that he was present, he was around, because he was 41's buddy. They joined together to raise money after the tragic tsunami. Bill Clinton became an important voice on policy matters when it came to AIDS in Africa."

"But that bond was forged through Bush 41 and Barbara Bush," Wallace explained. "And those relationships are there for the whole country to feel reassured that Democrats and Republicans can work together and that when things matter -- there was a lot of talk from [historian and memorial speaker] Jon Meachem about the values of civility, kindness, decency. I think those messages are messages everyone in this country needs to hear right now."