'Clear-cut': Seth Meyers challenges the media to call out Trump and his circle of ‘serial habitual liars’ 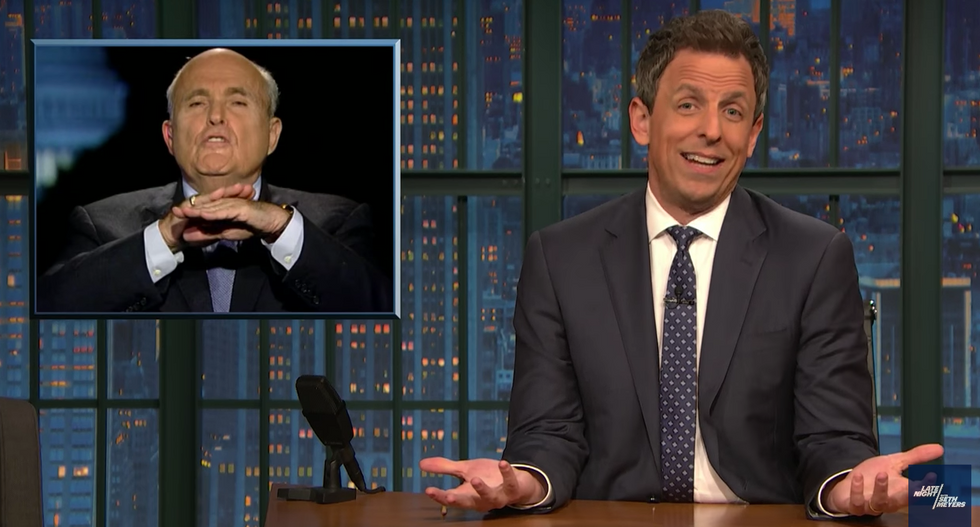 The “Late Night” host then turned his attention to Giuliani’s recent media blitz, including a claim the lawyer made on Fox News that he’s “not an expert on the facts, yet.”

“What are you talking about?” Meyers asked. “Trump’s gonna be the first client to plead insanity on behalf of his lawyer."

Meyers later played a clip of Giuliani petting an imaginary cat while discussing the apparently fawning treatment she received by the FBI.

“Did he just pet his own hand?” Meyers wondered. “Rudy Giuliani is like a Bond villain that can’t afford his own cat.”

“He probably had a cat and that cat was like, ‘This guy’s crazy I’m out here, goodbye—I’m going to law school,” Meyers added.

The host then pointed out that in a subsequent interview, Giuliani donned a somewhat garish piece of jewelry.

“What’s with the diamond encrusted pinkie ring?” Meyers demanded. “Are you trying to look like a mob lawyer? I’m surprised he didn’t do the interview in a velour tracksuit.”

“Rudy, what is wrong with you?” he continued. “It’s almost like he challenged himself to confess to at least one crime per interview. Soon he’s just going to start cold-calling TV shows to tell them about illegal stuff Trump did.”

Meyers later explained that why it’s been “blindingly obvious” since they first pushed th bogus conspiracy that Barack Obama was not born in the United States, “Trump and his inner circle are serial, habitual liars.”

“They lie constantly,” Meyers said. “And they do it one purpose. This particular case is as clear-cut as it can possibly get.”

“The media needs to just call these what they are, lies: if not, you’re just doing this to Trump,” Meyers continued, playing a clip of Giuliani fawning over his imaginary cat.