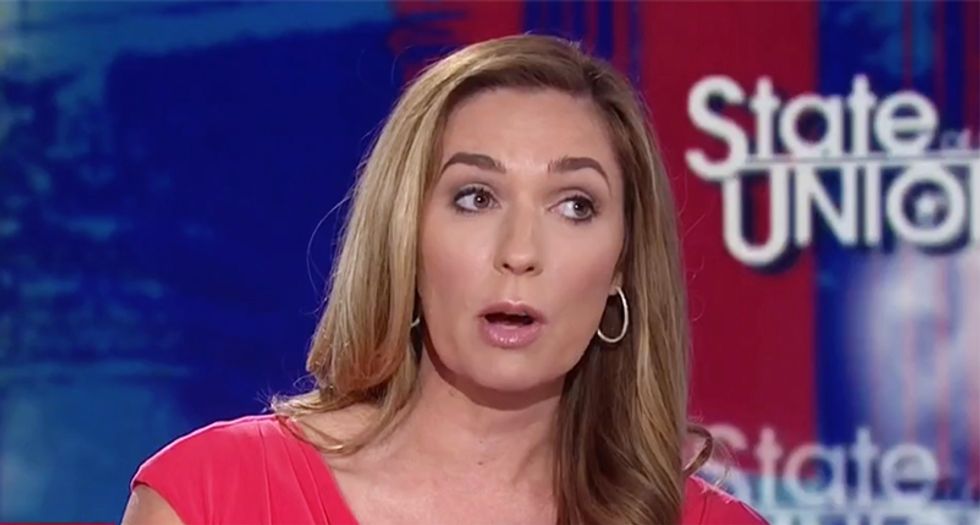 A furious Amanda Carpenter unloaded on White House Director of Strategic Communications Mercedes Shlapp on Sunday morning for saying she "stands by" a White House colleague who made a disgusting joke about Sen. John McCain (R-Az) dying.

Appearing on a panel with State of The Union host Jake Tapper, the conservative Carpenter -- once a speechwriter for Texas Sen. Ted Cruz (R) -- was livid when discussing Schlapp's lack of outrage over the offensive comment, that dismissed McCain's concerns over President Donald Trump's appointee to head the CIA -- saying who cared because he was "dying anyway."

Referring to a report from Axios, where Schlapp reportedly said, “You can put this on the record… I stand with Kelly Sadler,” host Tapper noted, "In this private meeting with Sarah Huckabee Sanders talking to communications staff [they] apparently were more upset about the leak."

That set Carpenter off.

"Obviously a horrible joke," the CNN regular began. "But then for people to say, 'I stand with the staffer who did it'? Listen, Mercedes Schlapp is a person with her husband -- there is a big New York Times profile where they told America they stood with Donald Trump in his worst times out of patriotism and duty to their country. I'm sorry, Mercedes, you are never going to make America great again when you trash the legacy of someone like John McCain who has done more for this country, served more, suffered more than anyone in that White House ever did."

Noting reports that Schlapp and her husband Matt made a big show out of walking on comedian Michelle Wolf for making jokes about White House Spokesperson Sarah Huckabee Sanders last month, Carpenter snarled, "Spare me the fake outrage over a bad White House Correspondents' dinner joke."