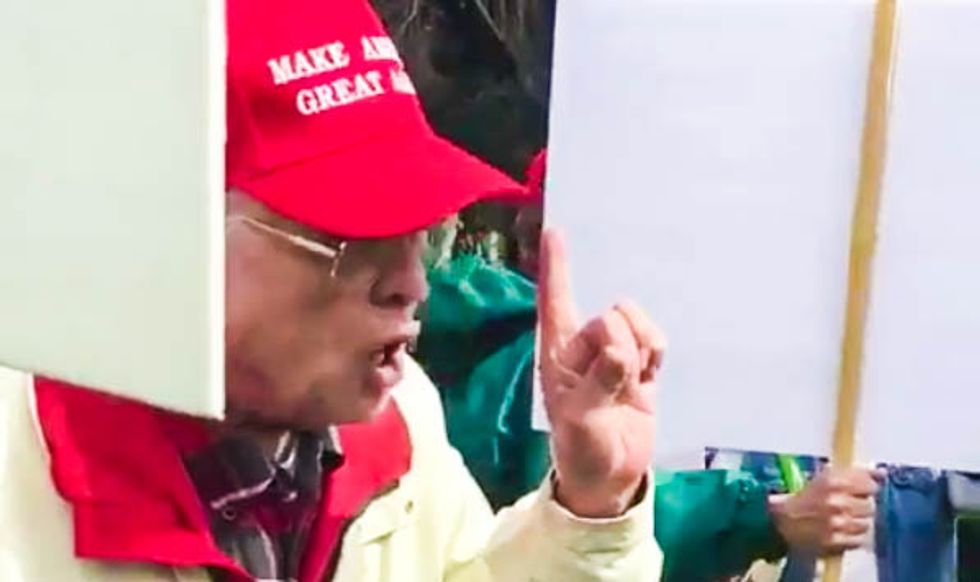 Writing for the Miami Herald, columnist Leonard Pitts explained that he wanted to take a new approach to describing the unreasonableness and viciousness of Trump's most diehard supporters -- so he decided to publish comments he receives from the president's fans, saying their words speak for themselves.

"Rather than pontificate yet again upon the motives of President Donald Trump’s supporters, I’ll let a few of them explain themselves in their own words," Pitts wrote, before introducing "Robert" who had a few things to say about Trump as well as his predecessor, Barack Obama.

“President Trump has accomplished more positive things for this nation in less than two years than the last three have accomplished in twenty plus years. After the past eight years of a Muslim Marxist in the White House this nation could not survive another demwit (sic) in the White House," Robert wrote. "Could you please list one thing the demwit party has done for the black people in America other than hand out government freebies for their continued votes?”

Or, as "Gary" wrote to the columnist: “America has a Constitution which guarantees equal rights for all and yet people like you hunger for change that puts people like me in the back of the bus. You seem egar (sic) to know what it would be like to be in the driver’s seat. You need look no further than Zimbabwe and South Africa. When people like you started driving the bus, the wheels came off. That’s what terrifies people like me.”

Pitts then explained what he was getting at by sharing his "fan mail."

"This column is presented as a service for those progressive readers who are struggling with something I said in this space. Namely, that I see no point in trying to reason with Trump voters. I first wrote that over a month ago, and I am still hearing how 'disappointed' they are at my refusal to reach out," he wrote. "So I thought it might be valuable to hear from the people I’ve failed to reach out to."

"I’m sure some of you think those emails were cherry-picked to highlight the intolerance of Trump voters. They weren’t," he added. "They are, in fact, a representative sampling from a single day in May, culled by my assistant, Judi."

"It’s still an article of faith for many that the Trump phenomenon was borne out of fiscal insecurity, the primal scream of working people left behind by a changing economy. But I don’t think I’ve ever, not once, seen an email from a Trump supporter who explained himself in terms of the factory or the coal mine shutting down," he wrote, adding, "Look, I get it. That’s a hard pill for those progressives who have kin or friends among Trump supporters. We love who we love, even when they — or we — are small, unkind or disappointing... But at the same time, let us be clear-eyed and tough-minded in assessing what’s happened to our country — and why. How else can we salvage it from the likes of 'A Trumper' who says Trump was needed to “get things back in order” after the 'terrible job' done by President Obama?"

"I have two words for those progressives who think it’s possible to 'reason' with that: You first," he concluded.

You read his whole piece here.