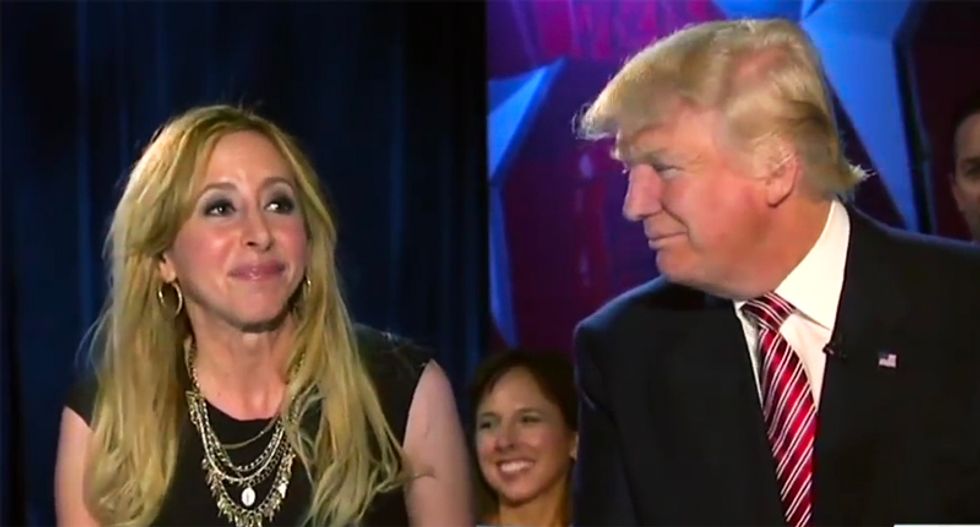 (Editor's note: Updated with a statement from Jason Miller below who disputes the allegations)

In a tweet storm on Sunday morning, a former aide to President Donald Trump and Sean Hannity regular accused her ex-lover, CNN contributor Jason Miller, was outside her home and felt compelled to call the police because she claims he is stalking her.

According to A.J. Delgado -- a Harvard-trained attorney and former senior adviser to Trump -- she discovered Miller standing in the rain and filming her home and that he smirked at her when she busted him.

The two -- both of whom worked with President Donald Trump which turned into an affair that produced a son -- have been locked into an ugly custody hearing, with Delgado claiming the judge is seeking a presidential appointment.

Delgado began her frenzy of tweets early on Sunday, writing, "WOW. So the temporary-Judge who gave Miller a sham Order on Friday, and who had her assistant tell Miller's firm to go ahead & send her whatever they wanted her to sign (!!!) (all caught on a VM inadvertently left to me) is a judge who was recently seeking to have TRUMP appoint her to a position (and possibly other upcoming vacancies). Not at all inappropriate to give sham, favorable 'rulings' to a known Trump advisor ... when seeking a job from Trump. AMAZING."

In a later tweet she named the judge ("JUDGE FAJARDO-ORSHAN") and said she has filed a motion for removal over a conflict of interest.

She then turned to making accusations against the married Miller who is locked in a custody battle over their child, tweeting: "Yes, sadly, I had to call the cops on Miller about an hour ago. He was standing outside my home like a crazy person, in the middle of the street in the rain, filming my home. He saw me through a window and was smirking at me, like a clown in a horror movie."

Although she offered no pictures of Miller outside her home, she added that she warned him via text that she had called the police and that he then left so she called off the cops.

You can read the whole saga below via Twitter.

a judge who was recently seeking to have TRUMP appoint her to a position (and possibly other upcoming vacancies). N… https://t.co/zGyEadcKgF
— A.J. Delgado (@A.J. Delgado) 1527421958.0

In a statement to Raw Story, Jason Miller wrote the following:

Thank you so much for the support and encouragement these past few months, and especially the support we have received today, as those who know me are aware that what Ms. Delgado is stating is completely inaccurate.

From before our son’s birth, my efforts have been aimed toward addressing and resolving matters in a reasonable manner with his mother, as that is what is in the best interests of our child, who is now a wonderful 10 months old, almost 11 months.

Regrettably, Ms. Delgado has taken a different approach, attempting to publicly portray me in a negative light with my family, friends and employers. She has made numerous false statements, has written inaccuracies in different public forums, as well as denying our son the right to spend time with me, his sisters and my wife.

The most egregious denial to our son to spend time with me and his paternal family has been this weekend, as we have a written mediated Agreement clearly stating our son is to spend extended time with me, his sisters and my wife for extended time on Friday, Saturday and today. That has not been possible, as each day Ms. Delgado has raised a different excuse for her violating the terms of the Agreement.

As Ms. Delgado launches her tirade of falsehoods on social media, and in her communications with me, there is a 10 ½ month old child inside her home I love with all my heart and whose wellbeing I am greatly concerned for.

I’ve tried to keep this family drama out of the public eye as much as possible because there is an innocent child involved (not to mention my wife and daughters), but I am compelled to address this very frightening situation because Ms. Delgado has decided to make it all public.

I now have no choice but to address this with the Judge on an emergency basis at the conclusion of this holiday weekend.

Thank you for all of your prayers,