John Oliver: Michael Cohen is a lawyer that is so sh*tty it made Trump say 'get me someone good -- Rudy Giuliani' 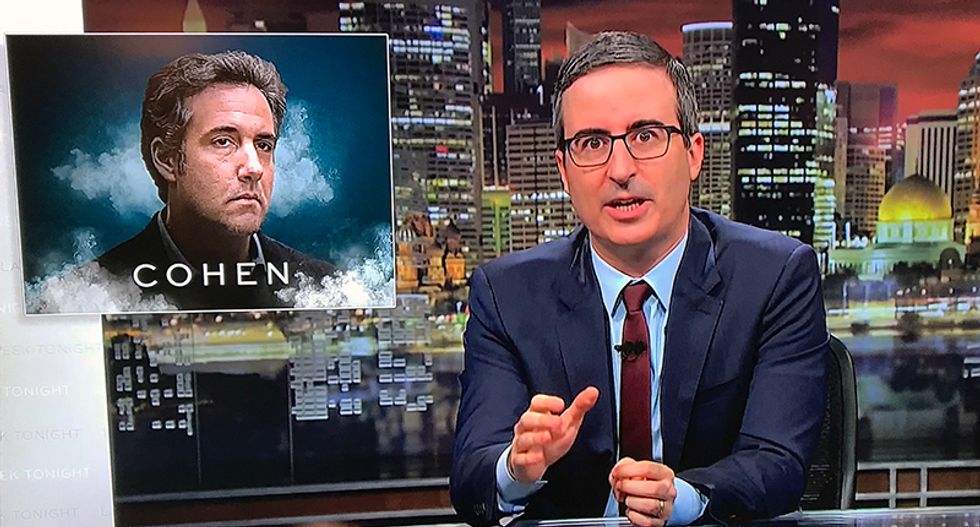 Oliver began by explaining that President Donald Trump's personal attorney is "so sh*tty" that it has prompted him to seek out Rudy Giuliani as his latest top counselor.

Cohen was already in trouble with the campaign finance violations for the payout to adult film star Stormy Daniels. Then things got much worse. Novartis disclosed it's contract with Cohen for $1.2 million. They were then followed by a slew of other companies that came clean about hiring Cohen for his influence over "swampy" Trump.

Oliver mocked Cohen for calling his company "Essential Consultants, LLC," because Cohen is neither essential nor a consultant. In fact, since Cohen is the sole employee, even the "s" in "consultants" is "a lie."

One potential client pitched by Cohen promised an impact based on his closeness to Trump but also his ability to influence the president. Oliver noted lawyers aren't generally known for campaigning for potential clients by revealing things about their other clients.

"It's like a doctor saying, 'If you try me I'll tell you about all of Larry King's birth marks,'" Oliver quipped. "Well, first, you're not supposed to be sharing that information. Second, ew! Ew!"

Russian-owned company Columbus Nova was one such company that hired Cohen's services. Oliver explained that the world is still unclear what exactly Cohen's expertise even is. "Other than wearing a jackets that look like they should be worn by a leprechaun used car salesman."

The HBO host went on to mock Cohen for meeting with Novartis one time before they decided they'd made a horrible mistake and "never wanted to see this man again. They paid $1 million not to talk to Michael Cohen. When you put it that way, actually, it kind of starts to sound like a bargain."

AT&T, on the other hand, hired Cohen on the first business day that Trump was in the White House. They said they sought counsel into understanding the president's thinking.

"Which is just ridiculous. Because, if you want to explain the president's thinking, have a donkey kick you in the head five times and then turn on Fox News," Oliver said.

Watch his full opener below:

Patrick Svitek, The Texas Tribune
SPRING BRANCH — On the first day of early voting for his Republican primary runoff, Attorney General Ken Paxton spoke to a crowd of supporters where he barely acknowledged the contest and totally ignored his well-known challenger, Land Commissioner George P. Bush.

It underscored a confidence as Paxton closes in on the Tuesday runoff where polls show he is well positioned to beat Bush, who has relentlessly attacked Paxton’s integrity as the incumbent fends off a number of personal and legal scandals. But Paxton’s supporters are unswayed by his baggage — if not outright dismissive — as they stick with him based on his record of battling the federal government in court.

“I really don’t care as long as he’s fighting the fight,” said Chris Byrd, a member of the State Republican Executive Committee who went to see Paxton speak to the Bulverde Spring Branch Conservative Republicans. “Like him or not, Ken Paxton has exhibited more courage in fighting evil than any attorney general we’ve had.”