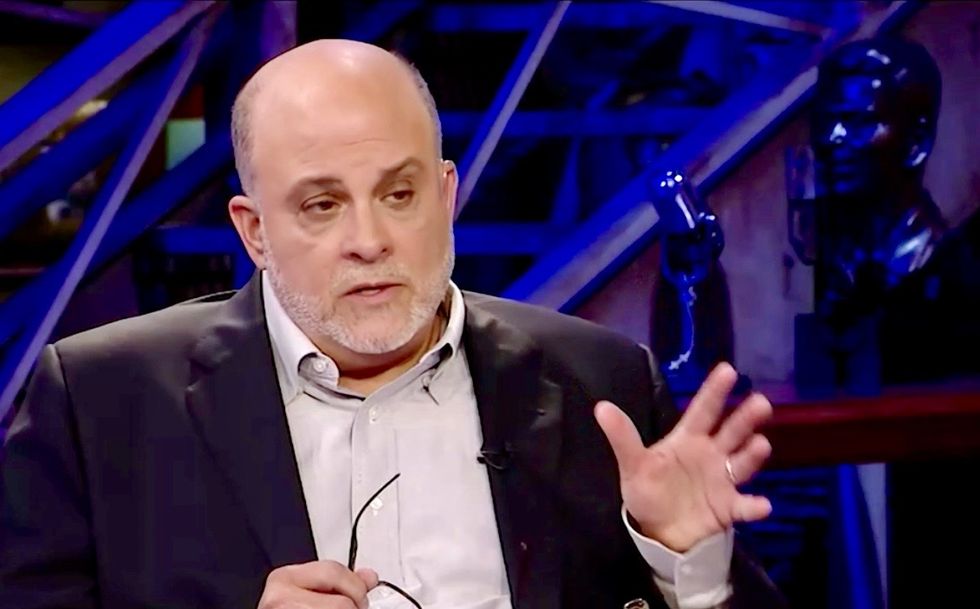 Conservative talk show host Mark Levin, who has evolving positions on whether the president is above the rule of law/Screenshot

The are so many ridiculous conservative hypocrites—Franklin Graham, Newt Gingrich—in the Republican party's tangled mess of sex, lies and excuses.

But Mark Levin is making a case for rising to the top of the list.

Levin's new Fox Show talk show is a pseudo-intellectual circle-jerk in which he interviews doctrinaire wing-nuts like Devin Nunes and the president of Conservative for-profit Hillsdale College (a major advertiser). It's been bashed by the network's core audience, who says it's boring.

But this Sunday night's show was notable for featuring an extended version of the half-baked legal arguments you hear in Fox News soundbites.

The entire episode was dedicated to arguing that Trump cannot be legally forced to appear before a grand jury—and to spinning insane conspiracy theories about Hillary's smashed Blackberries and the Russian uranium deal.

"What is this talk of subpoenaing a President of the United States to appear before a grand jury to answer endless questions about his conduct?" Levin asked. "If it is the official position of the Department of Justice—unchanged to my knowledge—that you cannot indict a sitting president, the idea that you can threaten a sitting president with a subpoena to drag them in front of a grand jury?"

But before he was a wild-eyed talk show host railing about gay marriage being the equivalent of incest and atheists, Levin was a conservative activist attorney who ran the Landmark Legal Foundation.

As Salon reported in 1999, Landmark found Jones a lawyer to sue Clinton.

"According to two sources, with the deadline for filing a sexual harassment suit against the president quickly approaching... Landmark assisted the hunt to find top-flight counsel for Jones. Two sources say that Landmark was instrumental in locating two experienced attorneys, Gilbert K. Davis and Joseph L. Cammarata, who agreed to take the case," the report said.

In 1998, when Levin was at Landmark Legal Foundation, he was asked about the investigation of Bill Clinton.

Levin didn't say that Clinton couldn't be forced to answer questions about sex with Jones or an intern—he gleefully bragged that Clinton likely faced multiple counts of perjury that he thought would lead to conspiracy and obstruction charges.

"People usually perjure themselves for a reason and that reason is usually to cover up something—that is, to obstruct an investigation. So typically, in a case like this, if you have one or more perjury counts, you trigger conspiracy and obstruction," Levin said. "So we're not talking about one possible instance of perjury, we're talking about a whole web of criminal issues."

"We fall into this trap of simply narrowing the issue to what the White House says it is, which is essentially one possible instance of perjury," Mr. Levin said in 1998. "The problem is what's being

In addition to commenting on how the president could be sued and helping one of the president's accusers find a lawyer so she could sue him, Levin himself even filed papers.

Levin even filed a formal complaint with the Criminal Division of the U.S. Department of Justice, charging Hustler publisher Flynt with helping Clinton and trying "to influence and impede" the Senate's impeachment trial.

Watch Levin spin his new legal theories in the segment below.