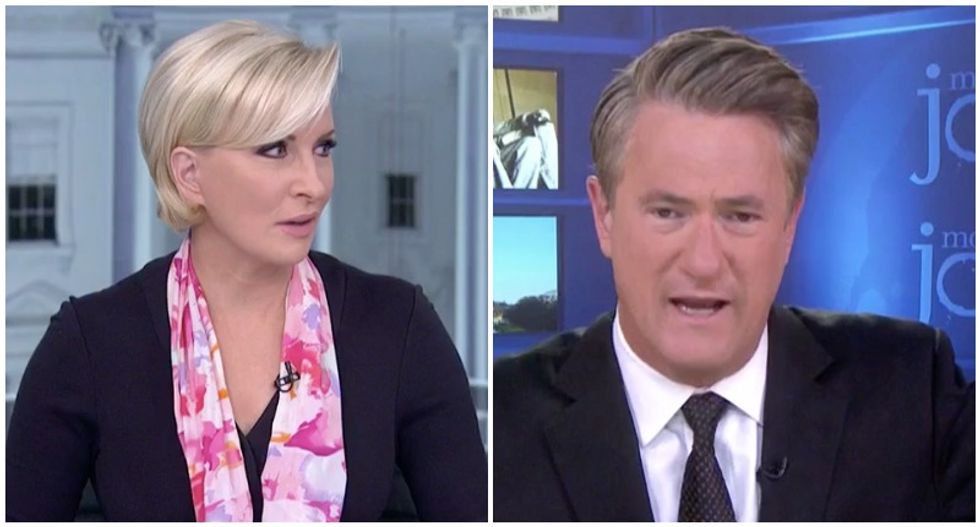 Co-host Joe Scarborough explained that his own campaigns had logged every single contribution to political activities when he served as a congressman, and he said Giuliani had made the situation worse for the president.

"Let me break this down," he said. "We always freaked out in my political campaigns about whether we got the exact value of the barbecue that somebody contributed for a fundraiser, and if it was $3,422, we had to go up to them, we had to get the receipts, we had to write it down because that's called an in-kind contribution. Somebody is doing us a favor, and those are subject to the same limits as cash payments."

Scarborough said the president and his attorney Michael Cohen would have broken the law if Trump repaid the hush payout to Stormy Daniels, as Giuliani has claimed, and MSNBC analyst John Heilemann agreed the explanation was legally problematic -- and the timeline didn't even make logical sense.

"The alleged affair took place in 2006," Heilemann said. "Stormy Daniels said she had one sexual encounter with Donald Trump. Okay, so 10 years go by in which according -- the story they're telling is the reason that she was paid off was to save Melania Trump from the pain of hearing about this affair. All right?"

"So for 10 years no money exchanges hands," he continued. "Now we get to October of 2016, as you point out, it's a few weeks, couple weeks before the presidential election, but on top of that it's coming after the 'Access Hollywood' tape. What happened is the 'Access Hollywood' tape has come out, where we hear Donald Trump talking about grabbing women by the private parts."

Scarborough agreed, and he said the president's new legal adviser had shredded his legal defense in the Daniels case.

"It makes zero -- yeah, absolutely no sense whatsoever," Scarborough said. "You look at it and look at the timing, there's just -- there is absolutely no explanation other than the fact that they were trying to keep it quiet. Rudy Giuliani, talk about maybe the greatest admission against interests when he was blabbing on TV shows this past week saying, could you imagine Hillary Clinton having that information before the second debate? Bingo."

Co-host Mika Brzezinski said the former New York City mayor just seemed thrilled to be the center of attention, regardless of the harm he was doing to his client.

"He looks just a little too pleased to be there," Brzezinski said. "I mean, he's just like a runaway beer truck."