‘Oh my god’: MSNBC’s Mika cringes in horror after Rudy Giuliani goes back on Fox News and makes another mess 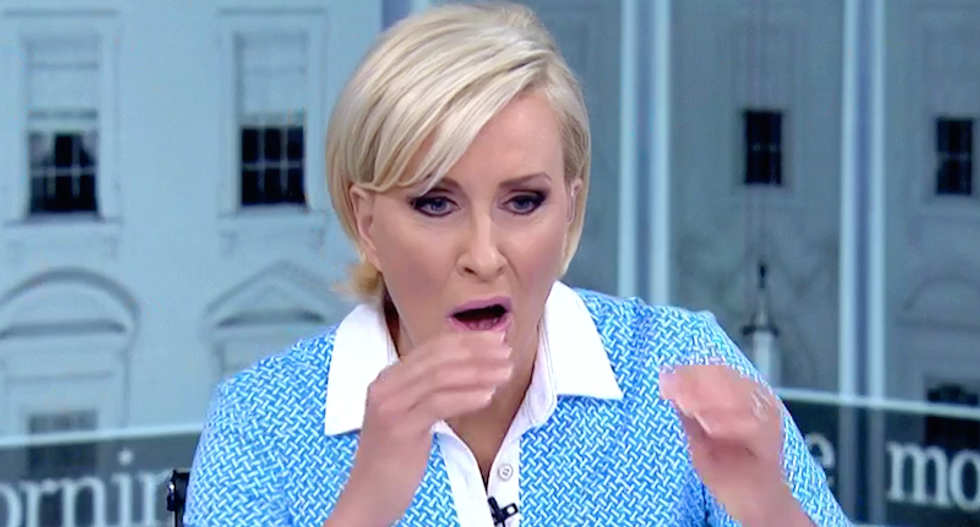 The former New York City mayor-turned-Trump legal spokesman told Fox News host Sean Hannity that the president had repaid lawyer Michael Cohen for the hush payout, and he went back on "Fox & Friends" the next day to clean up his mess.

Brzezinski covered her eyes and cringed at the Fox News video clip.

"They've got to get him off TV," co-host Willie Geist said.

Trump and Giuliani both insisted Daniels and her attorney Michael Avenatti were engaged in "extortionist" behavior by making false claims about an affair, and MSNBC analyst Eddie Glaude Jr. said that exposes the president in a defamation suit -- and opens up another risk.

"It seems to me that the DVD might just very well be forthcoming and that the defamation suit, the second one, is forthcoming because now he's on record," Glaude said.

"Guys, I think what's going on here," Geist said. "I think it's pretty clear after the second Giuliani interview is that Trump and Giuliani got together and they want to send a signal to Michael Cohen that, 'We're going to protect you and take care of you,' so that he doesn't flip. There is no other rationale for them being on TV going this far admitting to a lie other than say, 'Michael Cohen knows where all the bodies are buried and if he flips, we're in big trouble.'"

"Why now?" Lemire said. "Is it because they realize that there is evidence of these payments perhaps seized in these raids that would -- what else would trigger suddenly this about face and these revelations that they have decided that making the president a liar -- like to say, 'Yes, he lied about this on Air Force One' -- is a better alternative than what else must be coming down the road."

"The president does, that's the crazy (thing), he put him back on TV after the Hannity performance, and said, 'Yeah, go back and do it again,'" Geist said.