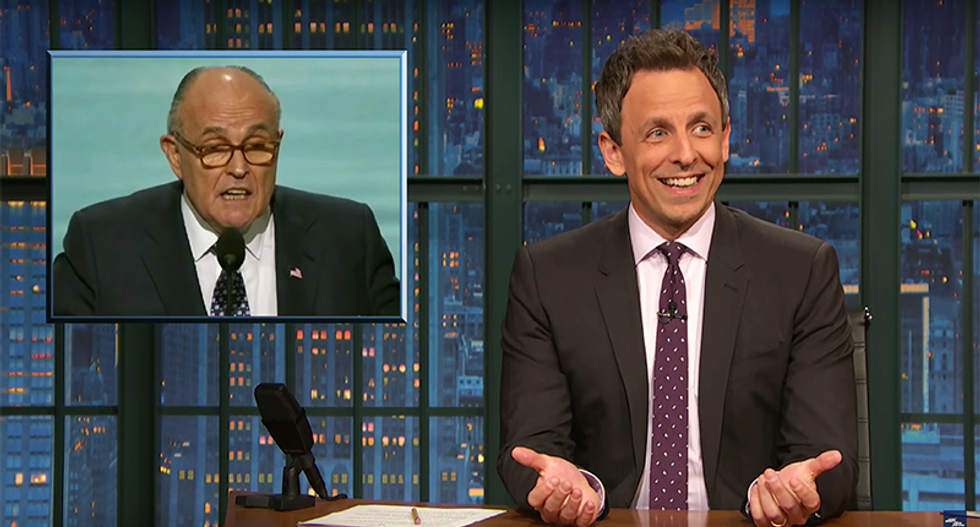 President Donald Trump's presidency has become not merely a joke but a kind of stereotypical parody of a desperate television series hurting for ratings, according to "Late Night" comedian Seth Meyers.

In his Thursday "Closer Look" commentary, the host noted that it's as if the White House is bringing back failed characters as it scrambles for new ideas.

It began with Michael Cohen reappearing over the last several months but then Trump's long-haired doctor popped up to join the cast. Now, Rudy Giuliani is saddling up to the "Fox & Friends" couch like an ex-girlfriend, who thinks they're getting back together even after years apart.

"There's no doubt that Trump has a crack legal team," Meyers said. "And by that I mean that every time one of them is on TV the screen cracks."

While many seek out calm, level-headed, counsel, "who follow facts wherever they go," Trump has opted for another route. All Meyers could do is smile uncomfortably and point to the former New York Mayor as the new chief executive of Crazytown.

"God bless him though," he continued. "I hope I have that much energy when I'm 200 years old."

Calling Giuliani the "Mulberry Street Dracula," the comedian noted that in the first Fox News interview, Sean Hannity didn't even ask about the payment to Stormy Daniels or the dossier about Trump's ties to Russia. Giuliani "went out of his way to bring it up. All he had to do to not undercut Trump was to not say that the president repaid the money." Oops. "You cracked under no pressure," Meyers said.

He went on to say that if Giuliani was O.J. Simpson's lawyer he would have shouted out in court "Hey, if the gloves don't fit, you can still stab somebody!"

Even Hannity seemed shocked when the former mayor revealed that the president repaid the Daniels money to Cohen.

"Oh, I didn't kow that," the Fox host can be overheard saying while the camera focused on the easiest confession in legal history.

"Sean Hannity is the only guy who would say, 'Dear God! What have I done?' When what he has done in journalism," Meyers quipped.