The Trump administration argues that adults shouldn't have sex for fun 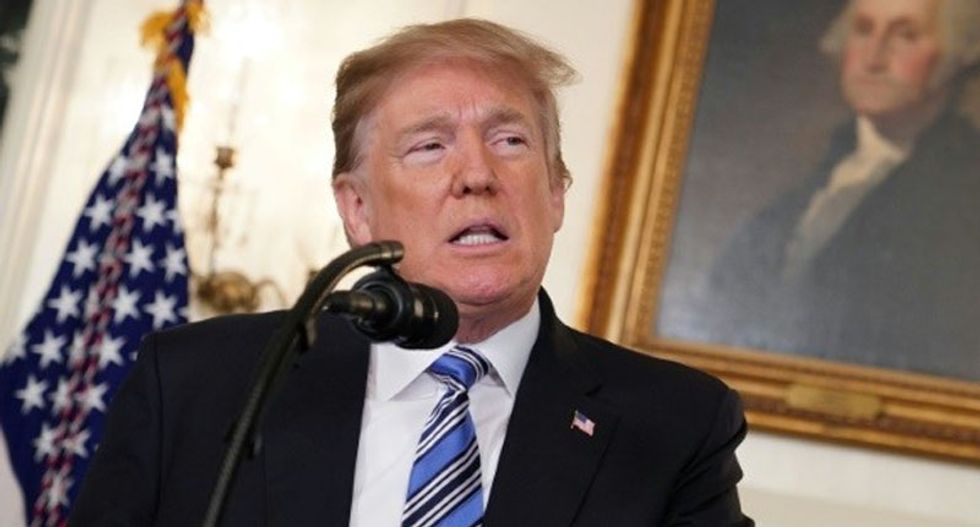 Journalist Sarah Posner has pointed out that Rudy Giuliani's defense of Trump is also in this vein, suggesting that payoffs to silence women are so common as to be unremarkable.

One can quarrel with the idea that hush-money-to-porn-stars is nearly as widespread a practice among rich celebrities as Trump would like you to believe. But what makes this entire episode even more bizarre is that while all this is going on, the Trump administration has put its full weight behind promoting sexual abstinence — not just for teens, but also for adults — as the only acceptable choice for the most people, who presumably don't have the money to cover up their private indiscretions with large payouts.

On Wednesday, three organizations — the ACLU, Planned Parenthood and the National Family Planning & Reproductive Health Association — joined together to sue the Department of Health and Human Services Office of Population Affairs for drastically rewriting its Title X funding priorities to grant awards to programs that favor abstinence programs over contraception provision. Title X was explicitly created in 1970 to help low-income women obtain contraception, but the Trump administration's new guidelines indicate a preference for programs that discouragecontraception use in favor of advising women to abstain from sex when not seeking pregnancy.

The administration has also revamped the Teen Pregnancy Prevention Programs (TPPP) to discourage contraception use in favor of "just say no" lectures. But these changes to the Title X program are about undermining birth control access for adult women as well as teens.

“The funding announcement invites grantees to push ineffective, abstinence-only programs for teens and adults alike," Ruth Harlow, a senior staff attorney for the ACLU explained on a press call. "Let me be clear, these changes would mean using government funds to promote 'no sex outside of marriage' ideology."

Arguably, the guidelines are even stricter than that. Married women can and do use Title X clinics, but the document makes no mention of contraception, even for women in heterosexual marriages. It simply isn't mentioned at all.

Instead, the document encourages programs to push "the benefits of avoiding sexual risk or returning to a sexually risk-free status, especially (but not only) when communicating with adolescents."

"Sexual risk avoidance" is a euphemism adopted by religious-right ideologues in recent years to replace the term "abstinence," which itself was a euphemism for more loaded terms like "purity" or "virginity." The document also emphasizes "fertility awareness method," or periodic abstinence, even though program guidelines correctly identify this as a "less effective method" compared to birth control pills or IUDs.

President Trump, who told Howard Stern in 1998 that he was "getting the Congressional Medal of Honor" for what Stern described as "screwing a lot of women," initially appointed a religious-right advocate named Teresa Manning to run the Title X program. In 2001, Manning described contraception as "anti-family" and has said it promotes "promiscuity." She also claimed, in a 2003 interview, that “contraception doesn’t work."

Manning stepped down this January and was replaced with Valerie Huber, who used to run the National Abstinence Education Association, a group that rebranded itself as Ascend when the term "abstinence" became too toxic. Huber's group not only opposed straightforward contraception education, but also promoted health education guidelines in Tennessee public schools barring teachers from teaching any "message that encourages students to experiment with sexual activity." None of those terms were well-defined, leading to concerns that even acknowledging that teens hold hands and kiss might be against the rules.

In addition to this change in Title X, the Trump administration is taking the sex-is-for-making-babies argument to the world. In April, BuzzFeed reported that in "closed-door meetings at the United Nations" during a two-week summit on women's issues in March, "Trump administration officials discussed shifting international policy on women toward abstinence-oriented education and teaching women sexual 'refusal skills.'"

Note the emphasis again on the word "women." The pretext that this is just about teenagers is falling away, and it's clear that the expectation here is that adult women should rely primarily or exclusively on abstinence for birth control. At the same meeting, U.S. officials also "contested the addition of references to 'modern contraception,' 'emergency contraception,' and 'unsafe abortion.'" Trump officials did push the idea of "fertility awareness," a method that anti-contraception advocates allow, albeit only for married couples, that relies on periodic abstinence rather than full-time abstinence. (It's essentially what used to be called the "rhythm method.")

The Trump administration also tried to take away contraception access from adult women, married or not, by passing a rule that would allow any employer to deny an employee her right to use insurance plans to pay for it. This move was blocked by a federal court, but is an example of the larger trend of aggressively seeking ways to stop women, both teenagers and adults, from getting effective birth control, especially if they are low-income women likely to struggle to pay for such services out of pocket.

The Trump saga with Stormy Daniels doesn't seem to surprise anyone. This is a man who called People in 1991 to brag that he was "living with Marla" but had and "three other girlfriends," after all. Still, it's sometimes hard even for the most cynical to understand how white evangelicals, who support Trump more than ever, can square the hypocrisy of a lifelong Lothario leading an administration that aggressively pushes the idea that adult women should embrace lifelong sexual deprivation.

Part of this is no doubt sheer sexism, as women are the ones religious conservatives expect to embrace "refusal skills" while men are basically left alone. But there's also the possibility that it's about money. Low-income and middle-class women who rely on either government programs or insurance coverage for affordable contraception are under attack, but a (supposed) billionaire who can afford hundreds of thousands of dollars in hush money is shrugged off. Similarly, anti-choice activists attack women who seek $300 abortion care, but turned a blind eye when Republican fundraiser Elliott Broidy paid $1.6 million to a Playboy model to keep her quiet about their affair and her abortion.