WATCH: Pro-Trump economist starts shouting on CNN after clashing with columnist over unemployment 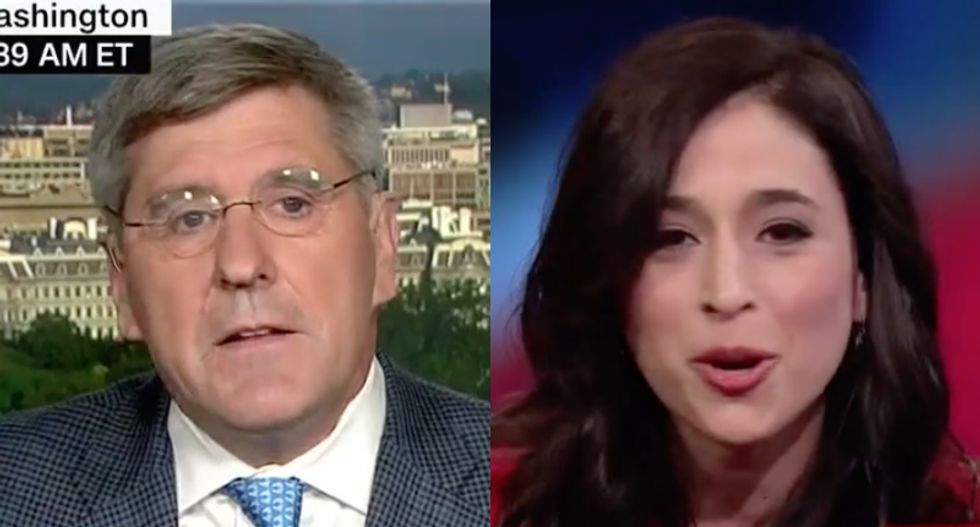 When discussing whether Donald Trump should be credited for falling unemployment rates, a Washington Post columnist became the subject of conservative economist Stephen Moore's ire for insisting the economic trend was in place long before the president took office.

"It's not like this moment when Trump came in and the red sea parted and suddenly there have a huge plummeting of the unemployment rate," CNN political commentator and Post columnist Catherine Rampell noted on Monday morning. "[Gross Domestic Product] growth, unemployment rate, hiring — the trends are pretty much exactly the same."

"Does President Trump deserve credit for the economy?" Moore responded. "That's sort of like saying Lebron James hit a shot at the buzzer for the game. Does he deserve credit?"

The former Trump campaign economist then took a shot at Rampell's employer.

"It's sort of ironic that Catherine is saying 'gee, this is just a continuation' because, of course, the Washington Post months and months before Donald Trump was elected said 'if Donald Trump is elected he's gonna ruin the economy,'" he said. "And now we have this incredible boom in the economy."

Cutting him off, Rampell noted that "if you didn't describe the economy as booming before, you shouldn't be describing it as booming now."

Moore once again took on the Post and "statistics that defy spin" before host Alisyn Camerota cut in to ask him if he believed the current economic trends were not present under President Barack Obama — and when he tried to cut her off, he called her by Rampell's name, appearing to mix them up.

"It's Alisyn," she said as the panelists continued to raise their voices about the economy.